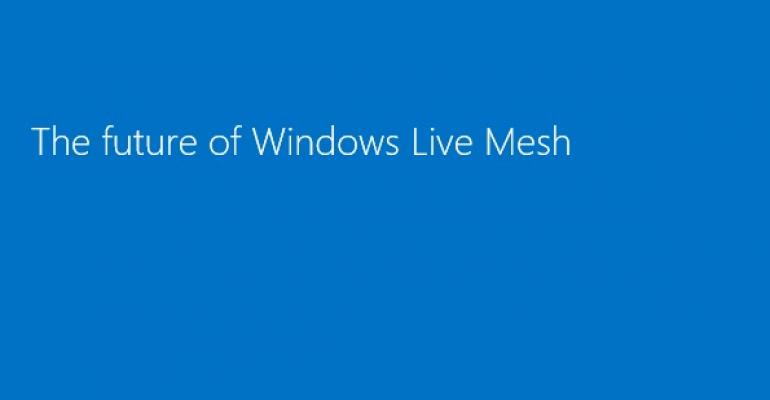 One more month to go until Live Mesh is officially retired

An email message to customers of Microsoft’s Live Mesh this week reminds them that the PC sync service is being retired in just four weeks, on February 13, 2013. The firm again recommended that fans of Live Mesh turn to SkyDrive and its various client applications as a replacement.

“Over the years, customers have asked us to bring many of the benefits of SkyDrive – including mobile access and online collaboration – to Windows Live Mesh,” the email notes. “We've also received requests for some of the features of Mesh – such as syncing and remote access—to SkyDrive. Bringing together key features of both products into SkyDrive allows us to maintain a single product and deliver all of these benefits to customers. Moving forward, a single product also allows us to quickly deliver more new features to everyone.”

Microsoft announced that it would retire Live Mesh back in December. Since then, it also revealed the March 15 retirement date for Windows Live Messenger, another key piece of the former Windows Live products and services.

There’s been a lot of hand-wringing amongst Live Mesh users about this retirement, with some scrambling to find replacements for every single Mesh feature. But I’ve successfully transitioned to SkyDrive and the SkyDrive desktop application for Windows 7/8 and find it to be superior to Mesh in many ways. You can read more about which Mesh features map to which SkyDrive features in SkyDrive Tip: Migrate from Live Mesh.

You might also find 2012: A Cloud Odyssey - From Live Mesh to SkyDrive to be useful; this article describes my own transition from Mesh to SkyDrive. On that note, SkyDrive is a central aspect of my “zero data” strategy in which I’ll be significantly lessening my need for local (PC- and home server-based) storage. I use SkyDrive to sync my “work set” of data—current and recent articles and other writing—as well as a core set of music, photos, and other data. I’ll be writing about this usage soon in a future Zero Data article. But the first in the series, Zero Data: The Hardest Part is Saying Goodbye, is available now.

No more Live Mesh whining, please. We get it. You’re going to miss it. It’s time to move on.