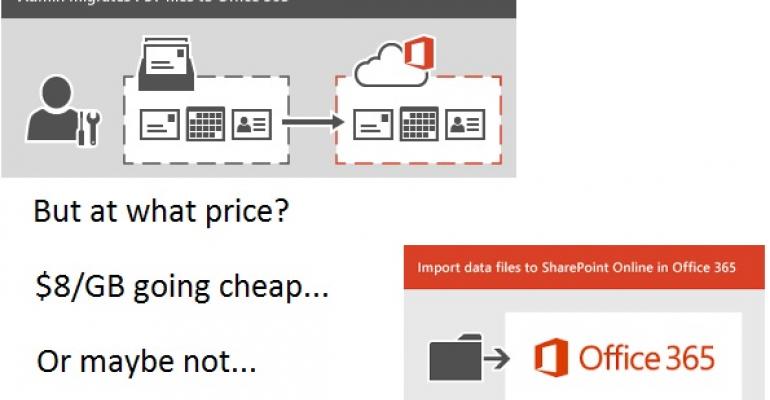 Microsoft intends to charge for the Office 365 Import Service

When Microsoft announced the Office 365 Import Service at Ignite, it all looked set fair for an offering intended that provided Office 365 tenants with two immediate benefits: First, the new service provides a way to mass import user PSTs into online mailboxes and archive mailboxes. Second, the service can be used by tenants who want to move away from third-party archive repositories like Symantec Enterprise Vault into Office 365. Of course, assembling and preparing PSTs before they can be ingested by the Office 365 Import Service can take quite an effort, not to mention expense, but the fact is that it’s now possible to import large amounts of data into Office 365 in a reasonably streamlined manner.

Things got even better when Microsoft disclosed in July that they had built a method to allow ISVs to develop “ingestion packages” to process data extracted from sources such as Twitter and Facebook. The same technique is used to process data taken from SharePoint and move it into Office 365, a capability that Microsoft has only just started to discuss. Everything looked as if things were moving along smoothly and that the Office 365 Import Service would become an important strategic tool for Microsoft to convince companies that the cloud is the place where all their data should be stored.

But then, in early September, Microsoft advised U.S. partners about the pricing that applied for data in a FAQ for the Office 365 Import Service. The document is marked as confidential within Microsoft and its partners, but PDF copies are freely available on the Internet. I received several tweets and messages about the pricing information contained in the FAQ quoted below:

“2. How much will the service cost?

Obviously, charging $8 per gigabyte imported into Office 365 takes a huge amount of shine off the value of the service. Think about it – if this charge was implemented and you send Microsoft a standard 4 TB SATA drive stuffed full of user PSTs, they would send you a bill for $32,768 (before whatever discount you can extract). An amount guaranteed to make the day of any happy CIO who has to find the budget for a PST migration project.

I asked Microsoft about the pricing and received an unsatisfactory response. So much so that I pushed back (several times). Eventually, Microsoft admitted that the price communicated to U.S, partners in the FAQ was in error (I think someone mixed up GB with TB). These things happen in big companies, especially when everyone is focused on major events like the recent launch of Office 2016.

According to a Microsoft spokesperson:

"Similar to our competitors, we offer a preview price to select partners. Our goal is always to be competitive with the market and aligned with the value that our customers expect. We look forward to sharing the official price of our new Office 365 Data Import service closer to GA.”

Reading between the lines, we can expect to see Microsoft reveal a very different pricing scheme when the Import Service reaches “general availability” status towards the end of October. We’ll just have to wait and see what the price is at that point. Whatever the price, it seems clear that Microsoft will charge for data to be imported into Office 365. That will come as a surprise to many who reasonably assumed that they would be able to import their data for free. Because the service is still in preview, you still have time to import some PSTs free of charge.

Microsoft has the right to charge for any service that they provide and that they can set the price point to match other offerings in the market. Microsoft provided the service free of charge during the preview period to allow people to get an idea about how the import process worked, how data are protected, and how the information ends up in user mailboxes. After all the bugs are sorted and the service goes into full production mode, it is entirely reasonable that a charge should apply.

When calculating what that charge should be, it’s fair to include the time required to accept the SATA drives shipped to Microsoft datacenters, to prepare those drives for processing, to protect the data against unauthorized access, and to return the drives to their owners in such a manner that any requirements to preserve a legal chain of custody are met. All of this is valuable work and should be paid for.

The now-disowned $8/GB price described in the FAQ is pretty outrageous and would serve only to drive potential customers away from using the service. It’s impossible to imagine that it would cost $32K to process a single drive full of PSTs. Although some human intervention and oversight is necessary to control the handling of the drives, I imagine that the actual ingestion process is automated to the nth degree. Let’s say that a technician can handle just one drive per hour (a level of productivity that few managers would tolerate, but it makes the math easier). The fully loaded cost of that individual is unlikely to be more than $100. The cost of the storage within Office 365 is perhaps another $20. Add a fair profit margin and the amount charged should be no more than $250. That’s a world removed from $32K.

Although Microsoft might charge for network uploads, I don’t see a logic in charging the same amount for these operations because in this case the tenant administrator does most of the work. PSTs are the only thing discussed in the FAQ but the Import Service can handle SharePoint and other data, so we need to know about pricing for these imports too.

The Import Service is still in preview so no information about charging or costs appears in the current user interface. No doubt this will be adjusted for the final release. Otherwise the appearance of a big charge for imported data on the monthly Office 365 bill could come as a shock to tenant administrators who imagine that they were doing the “right thing” by moving PSTS and other data into the cloud.

Microsoft doesn’t have a monopoly for data ingestion into Office 365 and customers can look elsewhere for lower-cost or higher-functionality options. The companies who specialize in PST processing are obvious competitors. Many of these companies have their own way to transfer information to Office 365, usually using Exchange Web Services, and some have a unique method. For example, QuadroTech, boasts of the splendidly named “Advanced Ingestion Protocol”, which is claimed to be four times faster at moving data into Office 365 mailboxes and archives than the Import Service.

Speedier transmission, better PST processing capabilities (deduplication, password cracking, detection and retrieval from user PCs, and so on), and superior error detection and logging should be sufficient to enable ISVs to compete with Microsoft. Note that I have said nothing about cost. That’s because prices vary across ISVs and between different countries and because we still don’t know what Microsoft will charge for the Import Service.

As always, the best approach is to try out software by testing it under realistic conditions to ensure that the features work well for you. An ISV offering might perform better and be cheaper than the Office 365 Import Service. You’ll only know the answer about performance and functionality after you do some testing. As to cost, well we'll just have to wait and see what Microsoft releases as their final pricing.