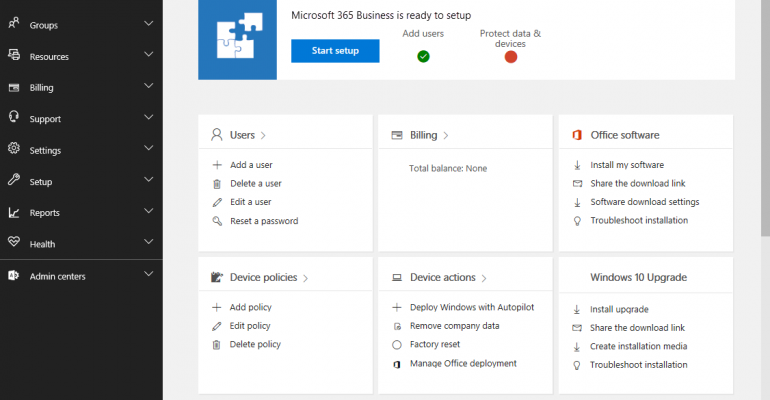 Microsoft 365 wants to become a one-stop shop for small businesses. The company has debuted several products rolled into one tidy console, and thrown in some new security features to protect an increasingly mobile and far-flung workforce.

Microsoft 365 wants to become a one-stop shop for small businesses. The company has debuted several products rolled into one tidy console, and thrown in some new security features to protect an increasingly mobile and far-flung workforce. Microsoft 365 and Office 365 Business Premium Customers will get the following products:

The use case for this tool: Keep people in the loop on a business's current hours and location, rather than running the risk of out-of-date information wrecking customer opportunities, or having to scramble to update information after the business gets a favorable mention in a blog or another media outlet.

(Editor's note: I asked if Twitter was going to be included, or if there would be a way for customers to schedule social media activity or monitor social media feedback. I was told that may be coming in the future.)

Microsoft Connections
Provided the Microsoft 365 customer has an email database of customers, this tool can help you maintain communications, run sales promotions, and boost customer engagement through branded emails; there's an option offering current customers a chance to provide business referrals, and allowing the business to track how well the referral campaigns work.There's a template library so the business doesn't have to engage an outside designer for a branded, visually coherent design.

Microsoft Invoicing
The PC and mobile-based app -- good for a mobile workforce that conducts a lot of business on the road -- integrates with QuickBooks Online or Microsoft Dynamics 365, and it allows a business to quickly generate job estimates and final invoices. There's a built-in sales tax calculator (provided one has entered in the states where one does business so Microsoft can import and update that data as needed), the option to include discounts, the ability to check customer history to see what their payment activity is like, and the ability to generate electronic invoices that allow customers to pay online via Paypal.

All of these will be available via the Microsoft 365 Business Center.

This is a central dashboard for Microsoft 365 customers, and like all dashboards, it's designed to display relevant and actionable metrics, then provide access points for acting on those metrics.

The dashboard provides access to the three programs listed above plus three pre-existing tools:

MileIQ, a mileage tracking tool, and:

Microsoft Bookings, a tool that allows Microsoft 365 customers to set up an online appointment-making site for customers; the tool then syncs the appointments to relevant employees' calendars so everyone knows what's going on when.

As workplaces continue to embrace a bring-your-own-device approach, they continue to grapple with the question of how to let their employees use their personal smartphones or tablets to conduct company business. Not only are there the concerns about company assets leaving a company-controlled IT system, there are security issues: 43% of recent cyberattacks targeted companies with fewer than 100 employees.

The new security features in Microsoft 365 offer a workable compromise: So long as workers have Microsoft apps on their phones and tablets (Outlook and OneDrive, for example), they can work on those devices.

The security will be controlled by the person in charge of the Microsoft 365 account, with options to:

What is most interesting -- in an age where school-aged kids cobble together office environments by using free version of Slack and Google apps, and where many mobile users embrace jailbroken phones so they can fully customize their handset -- is how Microsoft's acknowledged this reality and provided tools to deal with it. People with jailbroken devices don't get access to Microsoft 365 assets. What's more, users won't be able to copy work content from work-related apps to personal apps. In other words, if you're looking at a proprietary company document in Word on your tablet, you can't just select the contents and paste it into your tablet's text editor. Similarly, you can't move between work and personal accounts in Outlook when attaching files or answering email. In other words, if you hand your phone to your kid so they can play Toca Hair Salon while you're waiting in line somewhere, there's little chance they'll be able to romp among your work apps and email things to the wrong people.

Microsoft 365 has set up mobile device administration so the files are accessible via any Windows 10 device (that has permission) but remain siloed within the Microsoft ecosystem.

(Editor's note: When I asked whether people could still take screen grabs of content, which would then save as images to their photo files, the answer was yes -- but Microsoft's aware that's still a security concern and is working to address it.)

How to Get the New Features

These new apps are now available in Microsoft 365 Business and Office 365 Business Premium for customers in the U.S., U.K. and Canada.

Since the business apps -- Connections, Listings and Invoicing -- are part of Office 365, existing customers should be able to access them by exploring the tiles from their Office.com homepages.

Microsoft's also assuring customers that they can get the Listings, Connections and Invoicing apps, along with the Microsoft 365 Business Center:

You may already have seen Business center show up in your Office.com home page—this means that the apps are ready for you to use. If not, expect to get access in the next few weeks. If you are eager to get started, you can join First Release, which will get you fastest access to the apps, and also give you early access to new features as we add them in the coming months.