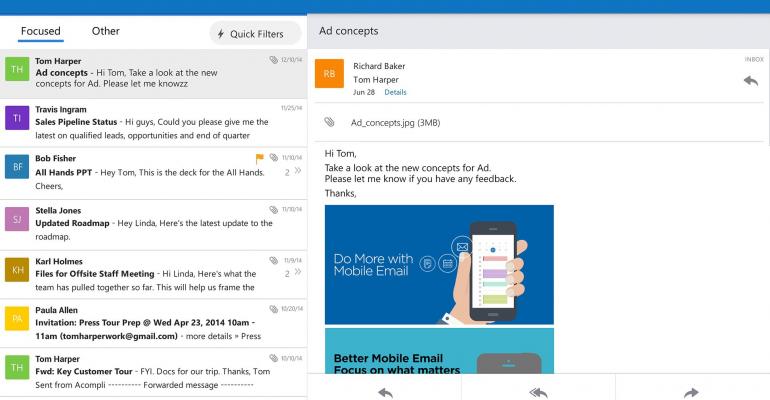 Microsoft announces release of Outlook app for iOS and Android

Remember during the Windows 10 event last week when Microsoft showed off what the new universal Outlook Mail app would look like in the upcoming Windows 10 release?

Well in today’s announcement it appears Microsoft is not only looking to make your app experiences across Windows 10 familiar but that is extending that same concept to iOS and Android. This may be the first sign that Windows 10 will enjoy similar rich experiences that we see with other Microsoft services on iOS and Android and that in turn should make many Windows device (phone/desktop) users happy.

Back in December of last year Microsoft acquired Acompli, a company that had created mobile email apps for iOS and Android. It was their former CEO Javier Soltero, who is now the Program Manager for Outlook at Microsoft, who penned one of the blog posts concerning this announcement.

In our early discussions with Microsoft, we realized that the closer we could work together, the more value we can deliver over the course of those 24 seconds. There is extraordinary power and untapped potential across all of the Office 365 technologies, and we think an extremely compelling and beautiful e-mail app will provide one effective portal to tap into it. Since the acquisition, we’ve been working hard on integrating our team and development processes to ensure we’re able to continue rapidly delivering new features and functionality to our customers.

I would definitely say they have been working hard and fast because the acquisition was announced on 01 December 2014 and now the app is released just a little under two months later.

So let’s summarize some of the features and info of this app:

That last bullet sounds a lot like universal apps doesn’t it?

Stay tuned for a hands on review of the Outlook Mail app on Android as I will be installing it on a Galaxy S4 today and giving it a spin.