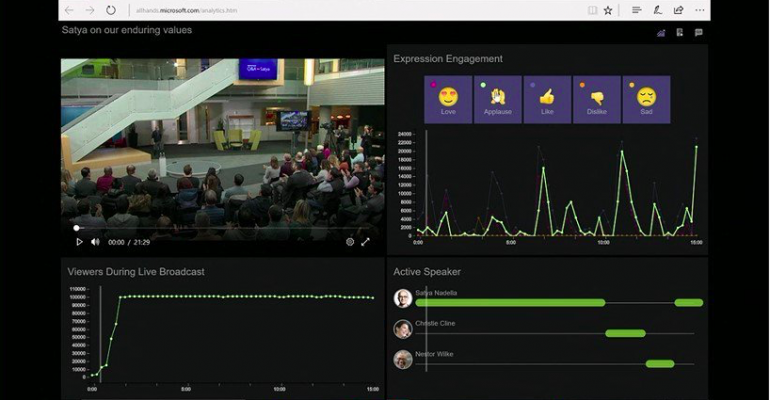 With Microsoft 365, Microsoft hopes to drive digital transformation at businesses big and small

One thing that Microsoft executives are quick to emphasize with Microsoft 365 — which includes Windows 10 updates, Office 365, and a variety of security and analytics tools — is that they want it to be much more than just a bundle of all those parts in one package.

If things work out, it will also be a level of simplification Microsoft has never had before.

With newly announced Windows AutoPilot, Microsoft hopes to make that a thing of the past, letting IT administrators set policies and then, as new users get their devices, having them run through a quick configuration wizard that does all the initial set up for them, including setting policies, installing apps, and applying the latest update.

Caldas said Microsoft is working to similarly simplify how security is handled.

“Customers traditionally spend a lot of time stitching together technologies to protect their environment,” he said. “Microsoft 365 takes that work away.”

And with Microsoft 365 Enterprise and Business, administrators are given easy ways to dig into key data points across their organization, from checking on which users have successfully kept their devices up-to-date on patches and policies to seeing real-time security data outlining key threats against an organization.

The ultimate goal is to make it easier for organizations to transform and compete in a digital age, by freeing up IT administrators to focus on projects that will drive the business forward while putting key data and tools in the hands of more employees — and getting them to use them.

“We’re seeing IT department look at their role in a different way then that they might have in the past,” said Bryan Goode, general manager, Office 365 Group. “They’re trying to understand how technology solves business challenges, and culture is one of them. It’s really about creating a culture of employee empowerment.”

“In a lot of ways, these workers have been left behind by technology,” he said. “If companies really want to get ahead with digital transformation, they really need to bring these workers along.”

That vision of empowering every employee, he says, is ultimately the goal of Microsoft 365.

“I think of Secure Productive Enterprise as a bundle. I see Microsoft 365 as a promise … that we’ll help our customers make their digital transformation,” he said.