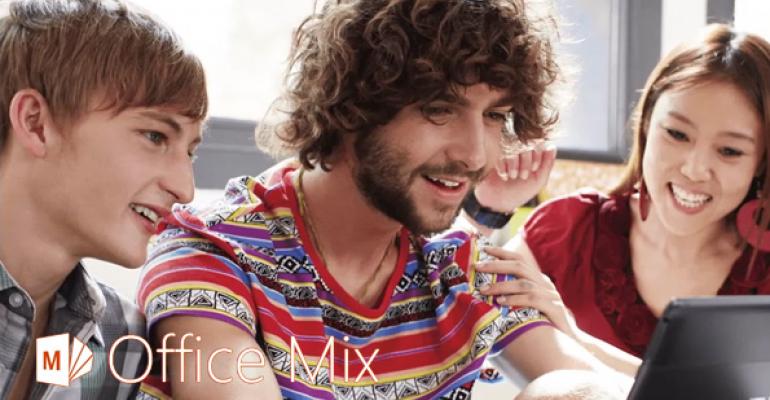 Time to Mix it up

UPDATE: That didn't take long. As of May 8, 2014, this excellent PowerPoint add-in is availabe to the public. --Paul

Microsoft this week launched a private preview program for Office Mix, which is currently available as an add-in for PowerPoint 2013 with SP1. Office Mix seems to be based in part on the PowerPoint Broadcast functionality that debuted in Office 2010, in that it publishes presentations to the public web. But it also lets you add audio, video and interactivity functionality, so that your presentations can become online lessons with elements like quizzes and exercises for the viewer.

Note: Office Mix is not yet publicly available. You can apply to be part of the preview program on the Microsoft Connect web site.

Of course, a lot has changed since Office 2010. So even the ability to broadcast PowerPoint presentations via Mix now occurs through a new method, i.e. Office Online, a full-featured web-based office suite that has matured greatly since its initial release (as the Office Web Apps) in the wake of Office 2010.

In any event, using Office Mix during this preview phase involves downloading and installing a PowerPoint add-in from the Office Mix web site, opening an existing PowerPoint presentation (or creating a new one) and then accessing the new tools, which are available from a Mix tab in PowerPoint.

Looking at these tools, it's not hard to imagine how they might simply be integrated into a future PowerPoint update. For example, the Record, Quizzes Videos App, Screen Recording, and Screenshot buttons are a natural for the Insert ribbon. But for now, Mix of course remains a separate, in-preview entity. So I fired up an old presentation so I could Mix it up.

The most basic tool here is Record: This lets you add an audio and/or video recording to the presentation, so you can narrate as you would if you were giving the presentation in a live setting. The Record interface is full-featured—and full-screen—and you can record per slide, as you'd expect. This alone will become one of the most-frequently used features of PowerPoint going forward, I'd imagine.

Once you've recorded audio (or audio and video), you can preview that recording in the slide itself. In this edit view, and during a normal presentation, you can manually trigger each slide's recording. But when you publish this presentation to the web, the recording will play automatically as you'd expect.

But it is the interactive features of Mix that will initially garner the most attention because these tools transform a presentation—what is essentially a speech, or other one-way conversation—into something that truly engages the audience. You can add quizzes, online videos, and apps via the awkwardly named Quizzes Videos App button, which interfaces with the Office Store.

Today, you can see quizzes (free response, multiple-choice, true-false and so on), videos (including Khan content from Microsoft), and various apps. There's not much here yet, but given how useful Mix is, I expect that to change over time. I played around with a multiple-choice quiz and it was exactly what you'd want to see.

To test the Mix content, you can use the Preview button in the Mix ribbon, rather than the normal F5 Present functionality. When you're ready, you can upload (which puts the presentation in the cloud) or export to video (which is useful for presentations you've mixed with audio/video only).

So it's early days and I've only just looked at some of the surface bits here. But Office Mix already looks like an amazing tool for PowerPoint users, whether they're in school, at home or at work. Sign up for the preview program and check it out.