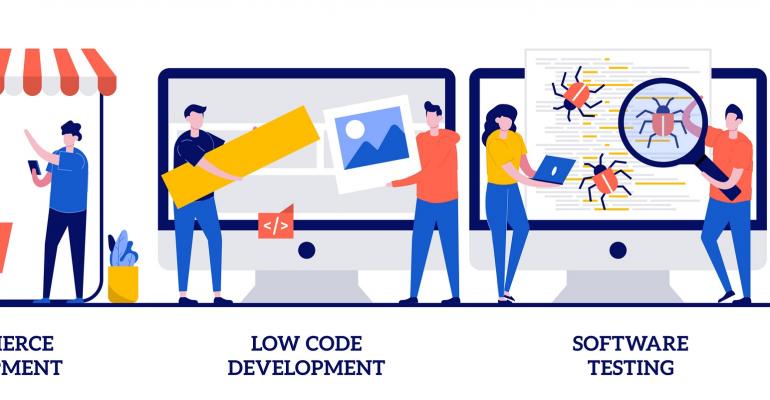 Why Enterprise Low-Code App Development Is in High Demand

Low-code application development isn't just for simple applications anymore. It is now the basis of larger enterprise apps and tools for digital transformation.

Low-code app development technologies have found new prominence in the pandemic era as organizations of all sizes seek to do more.

What has emerged in 2021 is a growing need and demand for a class of development technology referred to as enterprise low-code application development. In its Magic Quadrant on the low code space in 2021, analyst firm Gartner called enterprise-class providers a key direction for the software development market.

Jason Wong, distinguished VP analyst at Gartner, sees the trend of enterprise low-code development as being reflective of what organizations are expecting.

Enterprise low-code application platforms are also serving the needs of what Gartner refers to as fusion teams, according to Wong. Those are teams within enterprises that include business people as well as professional developers working in collaboration. While a simplified visual interface is a hallmark of low-code development, Wong noted that enterprise low-code application platforms increasingly also integrate command-line interfaces (CLIs) for custom sophisticated development as well.

With the continuing challenges of the COVID-19 pandemic and hybrid work, there is an opportunity for organizations to benefit from enterprise low-code application platforms.

As we enter into the new hybrid world of work, the use cases for low-code apps are dramatically expanding to meet growing business demands, said Josh Kahn, senior vice president of Creator Workflow Products at ServiceNow.

"The fact of the matter is that there simply aren’t enough technical developer resources out there to create the software experiences needed," Kahn told ITPro Today. "The use cases we are seeing with low code this year are becoming more complex and mission-critical in nature."

Kahn said his firm is also seeing an increase in cross-enterprise workflows versus simple applications that are bound to a single department. For example, Argonne National Laboratory built custom apps using low-code technology to handle tasks such as coordinating its emergency response teams, booking electrical vehicle charging stations and more, with over 165 apps in their queue awaiting approval, he said.

A key capability for enterprise low code that Gartner evaluates products on is their ability to support and enable collaborative app development.

One common component of collaborative development in DevOps is the use of a code version control service, like GitHub, but that's only the beginning, according to Mark Manning, customer evangelist at Mendix.

"Enterprises have made massive investments in their IT stacks over the past decade, and it’s critical that any low-code platform they choose lives at the center, not the periphery, of those investments," Manning told ITPro Today.

The use of visual models to develop software is driving a big change in how teams collaborate, according to Manning. He noted that there is a global insurer that uses the Mendix platform to create an underwriting tool. Originally intended as a project to mitigate risk, ensuring data was clean and integrated with their core systems, the insurer appointed an underwriter as product owner. Because he understood what was occurring in real time, feedback cycles were shortened from two-week sprint reviews to multiple short conversations per day where he could tell the developer where his team was rekeying or using workarounds, or if a piece of logic didn’t look quite right.

"By speaking the same language and vastly increasing the understanding and interaction between developer and business process expert, this insurer turned a risk mitigation project into a project that delivers six figures of business value per year by reducing the time underwriters spend on the process," Manning said.

Collaborative development is also the key to accelerating digital transformation efforts and improve workflows, according to Anant Adya, senior vice president of Cloud, Infrastructure and Security (CIS) Services at Infosys.

"In traditional development models, each individual falls on a spectrum of knowledge and expertise where only few business stakeholders are tech-savvy or only few tech people really understand markets, business concepts and processes," Adya told ITPro Today. "Due to this, the domain experts are talking in languages others don’t understand."

Enterprise low-code application platforms are designed specifically to solve communication challenges, he said, as everyone is working in the same virtual space and using a shared language, so circles of communication can be completed without delay.

It's likely that enterprise low-code application development will continue to grow in the coming years.

One of the biggest challenges for enterprise low-code adoption is the belief that low code exposes an organization to unnecessary risk, according to ServiceNow's Kahn. However, he said that's an outdated way of thinking.

"The truth is that if deployed with sufficient guardrails implemented by an organization’s IT team, low-code applications can be safe and secure and further organizations’ digital transformation journeys," Kahn said. "By ensuring IT teams are practicing appropriate governance and security hygiene, as they would with any other enterprise tools, organizations can leverage the power of low code safely."