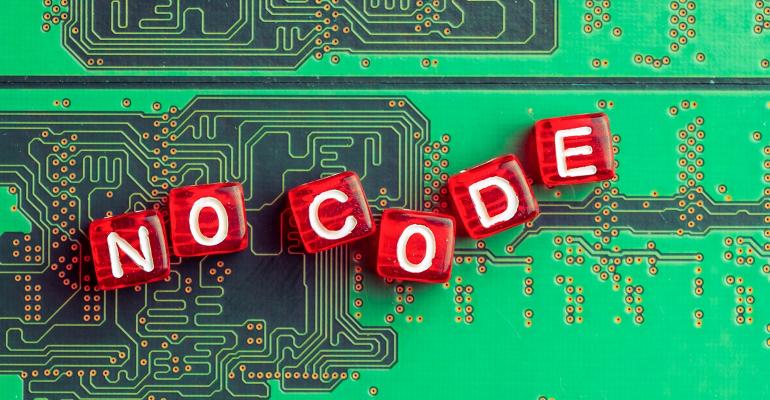 Deeper pushes to modernize and deploy fast shows how automation is increasingly part of software deployment.

In the span of a few years, low-code and no-code platforms, which reduce the burden on professional developers to create certain apps, have matured vastly. They have become resources large enterprises increasingly explore to speed up app development, but can that carry over to new, more intensive needs such as AI app development in a substantial way?

Gartner predicts that by 2025, some 70% of new apps developed by enterprises will use low-code or no-code resources. In 2020, less than 25% of new apps were developed through such means at enterprises. Further, Gartner also projects 75% of large enterprises by 2025 will use at least four low-code tools for IT app and citizen development.

Numerous low-code and no-code platforms compete to be the go-to option for enterprises to streamline development and deployment. There is Sway AI with its no-code AI platform for AI and machine learning application deployment. Plenty of startups are emerging in this market, including DuploCloud, which raised $15 million in February in a series A round for its low-code/no-code offering in infrastructure automation.

Others include TrueSource, which raised a $1.1 million pre-seed round for its no-code platform that can turn complex datasets into a monetizable app. Other low-code/no-code platform providers include Cyclr, Mendix, and Hyland with the list continuing to grow.

Related: Why Enterprise Low-Code App Development Is in High Demand

“We are in the mainstream adoption of low-code,” says Jason Wong, distinguished research vice president at Gartner. He says Gartner is watching how AI may factor into the low-code/no-code equation, via generative AI to assist potentially in the creation of applications, performing testing and improving quality of applications. “This is where the next wave of low-code will make further advances,” Wong says.

Such implementation of AI in low code is still early stage, he says, though large vendors such as Microsoft are investing heavily in this arena. “There are products out there using AI to analyze all the different applications that are built on a platform, anonymizing data models and UI elements from the customers,” Wong says. That can be used to give organizations advice on the construction of applications and more effective uses of their data.

Developing applications through traditional means often requires specialized skills. These days organizations face talent and resource constraints in IT, software engineering, and digital business units but additional circumstances may have played a role in that widespread embrace. “From an enterprise perspective, from a business perspective the pandemic has been a tide that’s lifted all low-code boats,” Wong says.

The need to solve some of the problems that arose in the pandemic pushed this trend, he says. This includes IT teams recognizing the need to move quickly and more rapidly than traditional coding approaches, Wong says. For instance, he says, a business might use a low-code platform to develop apps with full awareness that the apps will need a revamp or replacement in a few years. The alternative of not deploying could mean the business might not survive.

“Now, it’s not just one low-code tool inside organizations,” Wong says. “There’s multiple low-code tools.” Large software providers such as Salesforce, Microsoft, ServiceNow, Oracle, and SAP all have some low-code tools, he says. Coupled with products from sources such as Mendix and Unqork, Wong says there is a plethora of tools that are by nature low code.

During the early days of low code, just four or five years ago, such platforms were seen as a tactical or experimental option for creating new apps, he says. “Instead of buying yet another SaaS application, [organizations] would try and build it.” This may have been for prototyping purposes to ultimately code the app in AWS, Azure, or Google Cloud Platform, Wong says.

“Now low code is used for modernization and replatforming,” he says. For example, if an organization needs to rewrite parts of a monolithic legacy application to move to the cloud, he says platforms such as OutSystems, Mendix, or Appian might be used. “A lot of these low-code platforms have either moved to the cloud or are, in effect, cloud-native,” Wong says. “They can run on containers, create and support serverless functions, and have DevOps.”

Greater appreciation of low code and no code in the C-suite and beyond seems to be part of a broader transformation in how organizations address their needs. In Gartner’s 2022 Board of Directors Survey, 40% of boards indicated they are approving more technology budget to go into the lines of business for digital initiatives, Wong says. “Business units need more agility,” he says. “Low code is one of the key ways that business units will implement their applications, automations, data models, algorithms -- all things they need to solve their business problems with.”