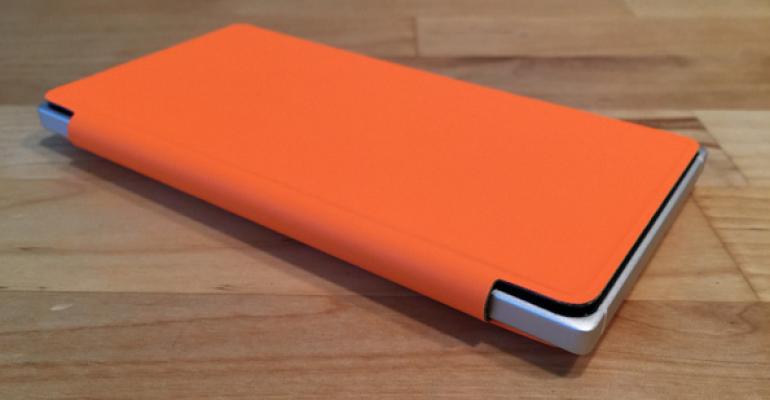 A cool accessory for Lumia 830 fans

I'm a big fan of device customization, and one of the neat things about newer Microsoft smart phones like the Lumia 830 is that you can often change the color of the device using a new shell. In the case of the Lumia 830 in particular, Microsoft sells a Wireless Charging Flip Shell that offers up a number of color choices, but also some protection for the screen.

The trouble with this and other Lumia accessories, of course, is that it can be hard to find. I generally turn to Amazon.com first for such things, but depending on what you're looking for, you may need to look elsewhere. But I was able to find the Wireless Charging Flip Shell for Nokia Lumia 830 (model CP-627) in at Expansys for about $50.

Microsoft offers the Wireless Charging Flip Shell in three colors—bright green, bright orange, and black—where the Lumia 830 itself is also available in white. I picked up the orange version.

Like the stock shell, the Wireless Charging Flip Shell clips onto the back of the Lumia 830 using a series of snaps. But because it includes a wrap-around flip cover, this accessory makes your color choice more obvious. You don't have to be looking at the back of the device to see it.

It also adds a bit of thickness, as you would expect. But it addition to the thickness of the flip cover, it appears that the back shell is also a bit thicker than the original shell, at least to my eyes.

And like the stock shell, it does provide Qi-based wireless charging capabilities, so you can use this in tandem with the excellent new (and very hard-to-find) Lumia Wireless Charging Plate (DT-903) or other similar accessories.

There is also a small bump right above the camera hole, which I take to purposeful and aimed at keeping the lens off whatever surface your Lumia is resting on when positioned normally. This is absent from the stock shell.

Not a big deal, but the prominent Nokia logo found on the stock shell is missing from the Wireless Charging Flip Shell. There's a subtle Nokia logo on the front flip cover part, but it's so subtle you can't see it in any of these shots.

Like the terrible Protective Cover that Nokia shipped last year for the Lumia 1520, the Wireless Charging Flip Shell isn't "smart": It can't turn on your device when opened or off when closed. So in this way it is inferior to Apple's Smart Covers for iPad or the HTC One M8 for Windows's Dot View case. But it provides a nice microfiber lining that will keep the screen clean and protect it against everyday scratches. And unlike the Dot View, when you open the Wireless Charging Flip Shell, it stays flat, which I prefer.

Hopefully the Wireless Charging Flip Shell for Lumia 830 becomes more easily accessible here in the US after the smart phone itself becomes more widely distributed. Unlike the Lumia 1520 Protective Cover, I'll probably keep using this accessory.