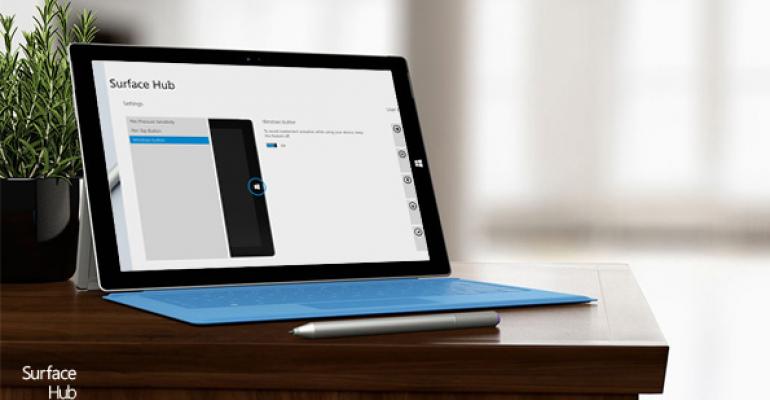 Microsoft quietly updated the Surface Hub modern app this week, adding the ability to disable the Windows button on the Surface Pro 3. The odd placement of this button—it's on the right bezel when used normally in landscape mode—has been a source of frustration for artists and others who use the device with Surface Pen.

Microsoft first released the Surface Hub app back in October. That initial release included two Surface Pen-related configurations: The ability to change the sensitivity of the Surface Pen's tip and a simpler way to switch between OneNote (desktop) and OneNote mobile app using the Surface Pen top button. (Contrary to the name, this app works only with Surface Pro 3, not older Surface models.)

At the time, Microsoft promised to increase this app's configuration capabilities. And this week's update is the first we've seen that does so. It lets you toggle the Windows button between enabled (default) and disabled modes.

If you do disable the Windows button, you'll still be able to use other alternatives, including:

Windows key. The Windows key on your keyboard will still work.

CTRL + ESC. This keyboard combination works fine too, and is particularly useful for keyboards with no Windows key.

Charms. Swipe in from the right edge of the screen to access Charms and the Windows charm.

So this is a fairly obvious feature given the current Surface Pro 3 configuration. But I'm imagining a future Surface Pro device where the Windows button is available on all four bezels and you configure which one you want based on your own usage of the device. That way, it would work well with lefties, or people who wish to use the device in portrait mode normally.

Anyway, this is better than nothing.

You can download the free Surface Hub app from the Windows Store.