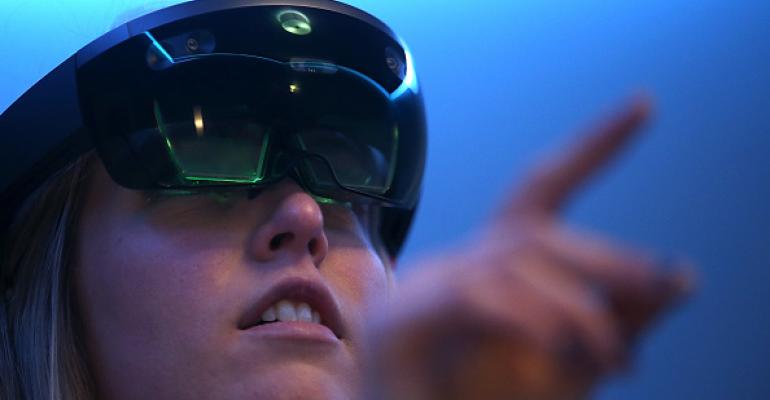 The contract, which could eventually lead to the military purchasing over 100,000 headsets, is intended to “increase lethality by enhancing the ability to detect, decide and engage before the enemy,” according to a government description of the program. The U.S. Army and the Israeli military have already used Microsoft’s HoloLens devices in training, but plans for live combat would be a significant step forward.

(Bloomberg) -- Microsoft Corp. has won a $480 million contract to supply prototypes for augmented reality systems to the Army for use on combat missions and in training, the Army said. The contract, which could eventually lead to the military purchasing over 100,000 headsets, is intended to “increase lethality by enhancing the ability to detect, decide and engage before the enemy,” according to a government description of the program.

"Augmented reality technology will provide troops with more and better information to make decisions. This new work extends our longstanding, trusted relationship with the Department of Defense to this new area,” a Microsoft spokesman said in an emailed statement.

The U.S. Army and the Israeli military have already used Microsoft’s HoloLens devices in training, but plans for live combat would be a significant step forward.

HoloLens is one of the leading consumer-grade headsets, but a large consumer market doesn’t yet exist; a video made for the European Patent Office this spring said it had sold about 50,000 devices.  That’s about half the number the Army expects to buy through its augmented reality program, which is called the Integrated Visual Augmentation System, or IVAS.

With the contract, the Army immediately becomes one of Microsoft’s most important HoloLens consumers. It expects devices to vary from their consumer-grade counterparts in a handful of key respects. In a document shared with companies bidding on the contract, the Army said it wanted to incorporate night vision and thermal sensing, measure vital signs like breathing and “readiness,” monitor for concussions and offer hearing protection. It said the winning bidder would be expected to deliver 2,500 headsets within two years, and exhibit the capacity for full-scale production.

The contract went though a bidding process designed to encourage the Army to do business with companies who aren’t traditional defense contractors. Magic Leap, which makes the main competitor to HoloLens for the consumer market, also pursued the contract. In early August, the Army held meetings with 25 companies interested in participating in some way, including Booz Allen Hamilton Holding Corp., Lockheed Martin Corp., and Raytheon Co. The technology industry’s cooperation with the U.S. military and law enforcement has become increasingly tense over the last year, with employees at companies like Alphabet Inc.’s Google and Amazon.com Inc. pushing back against government contracts.

Earlier this year, hundreds of Microsoft workers signed a petition criticizing a contract with U.S. Immigration and Customs Enforcement that Microsoft had originally said included some of its AI software. In October, a blog post purportedly written by Microsoft employees urged the company not to bid on a multi-billion dollar U.S. military cloud contract. "Many Microsoft employees don't believe that what we build should be used for waging war," they wrote.    Later that month, Microsoft's President and Chief Legal Officer, Brad Smith, said the company would continue to sell software to the U.S. military. Smith wrote that employees with ethical qualms with projects would be allowed to move to other work within the company.   "Artificial intelligence, augmented reality and other technologies are raising new and profoundly important issues, including the ability of weapons to act autonomously. As we have discussed these issues with governments, we’ve appreciated that no military in the world wants to wake up to discover that machines have started a war," he wrote. "But we can’t expect these new developments to be addressed wisely if the people in the tech sector who know the most about technology withdraw from the conversation.”