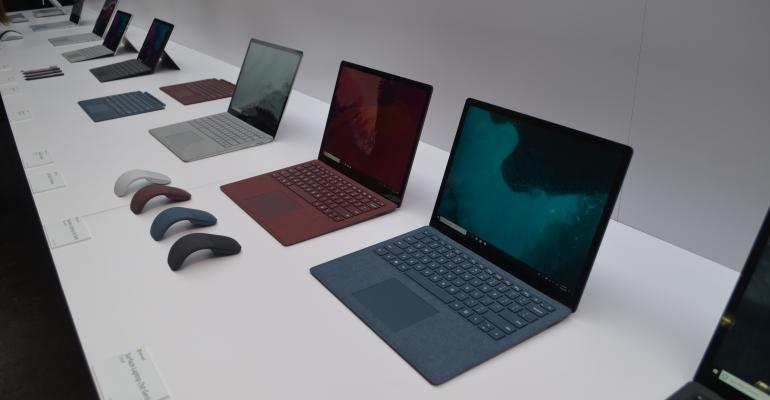 In the six years since Microsoft began making its own devices, the company has taken the Surface from an ill-received convertible tablet to a well-reviewed line of devices with sales that topped $5 billion in the most recent fiscal year.

The Surface Laptop 2, a laptop with a touchscreen, and the Surface Pro 6, a combination laptop and tablet, have faster processors and a new matte black color option. The Surface Studio 2, the first upgrade to Microsoft’s giant touchscreen desktop computer, comes with a brighter screen and improved graphics processing.

Surface Headphones have 15 hours of battery life and integrate with Microsoft’s Cortana voice assistant, the Redmond, Washington-based technology giant said at a media event in New York City on Tuesday.

In the six years since Microsoft began making its own devices, the company has taken the Surface from an ill-received convertible tablet to a well-reviewed line of devices with sales that topped $5 billion in the most recent fiscal year. Along the way, the company popularized the two-in-one device that functions as a tablet with removable keyboard, eventually pushing Apple Inc. to release the iPad Pro. Still, Microsoft has yet to produce a real blockbuster. According to IDC, the software giant hasn’t cracked the top 5 of the tablet market.

The Surface Pro 6 is Microsoft’s flagship device and includes the detachable keyboard. It’s the closest kin to the original Surface. The new version includes a quad-core Intel Corp. processor that Microsoft says makes the device 1.5 times faster than the previous generation. It starts at $899.

The Surface Laptop 2 is the first update to the machine that Microsoft launched last year to positive reviews. According to IDC, Microsoft shipped 102,000 units of the original Surface Laptop in the second quarter, helping to push overall Microsoft device shipments up nearly 9 percent year-over-year. The new model also includes a quad-core processor option that makes the laptop 85 percent faster than the first model, according to Microsoft. Prices begin at $999 and it’s available Oct. 16.

The Surface Studio 2 is the first upgrade to the desktop computer that debuted in 2016. It’s the most-unique looking Microsoft hardware product, bringing a massive touchscreen to desks that can be used upright like a standard monitor or pushed down like an easel for drawing. The new model has a brighter display in addition to faster chips, and costs $3,499 or more. Pre-orders start Tuesday.

Headphones are a new hardware category for Microsoft. The over-ear design is unique for a major technology company, eschewing the small, in-ear style popularized by Apple’s AirPods. The Bluetooth headphones work with Microsoft devices, but can also pair with iPhones and Android phones. They go on sale later this holiday season and cost $349.

Microsoft is also integrating its computers more closely with Apple and Android mobile devices. The push, first announced at the company’s Build conference for developers in May, includes a new app called Your Phone. It’ll let users receive and respond to text messages and other notifications from their Surface instead of pulling out their phone.

The new Microsoft devices face significant competition. Apple is planning a revamped, low-cost laptop with a high-resolution screen and two redesigned iPad Pro models later this year, while Google is expected to launch a device with similar functionality to a Surface at an event on Oct. 9.