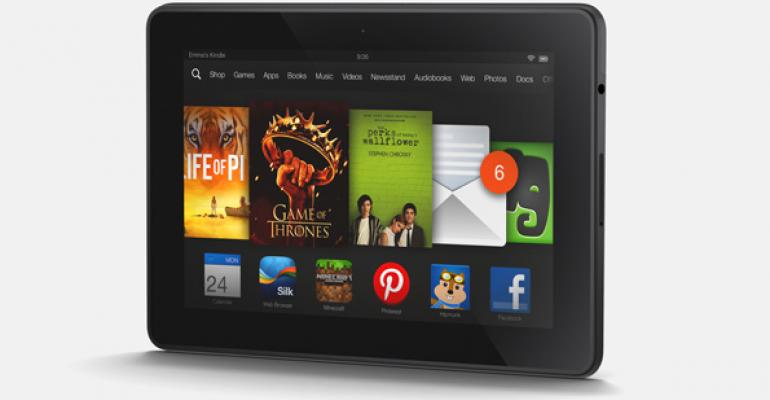 The best Kindle tablet yet ... But is it enough?

There's no doubt that the Kindle Fire HDX is the best Kindle tablet yet, but it enters a market crowded with high quality competition. Whether this device's Amazon-centric user experience is a benefit or a curse is a matter of personal preference, of course. But your opinion on this central matter will also drive any decision around buying the HDX.

On paper, the HDX is an impressive mini-tablet that holds up quite well against its Nexus 7 and iPad mini with Retina Display contemporaries. So let's see how they really stack up.

Starting at just $229 for the 16 GB version, it is certainly a tremendous  value, again on paper, and far below the $299 starting price for a non-Retina iPad mini or the more technologically comparable iPad mini with Retina Display, which will cost an astonishingly expensive $399 (and up) when it debuts later this month. No brainer, right?

Not exactly. That $229 Nexus 7 has some important advantages over the Kindle Fire HDX, as I'll highlight throughout this review. But since we're focused on the price for the moment, I'll remind you that the $229 HDX comes with "Special Offers"—i.e. advertisements. You can of course buy a non-ad-based Kindle Fire HDX, but the starting price jumps to $244. So the Nexus 7 is in fact less expensive.

(One final wrinkle on the price: Kindle Fire HDX buyers in the United States get 500 "Amazon Coins"—an Amazon-specific micro-currency that can be used to purchase apps and games from the firm's online store. This is a $5 value, so one might argue that the price differential is only $10 for US customers. Fair enough.)

Overall, the Nexus 7 is a marginally better deal, on paper, than the HDX. Both Android-based devices are a considerable value compared to any iPad, as you might expect.

Amazon is delivering a very powerful tablet for the price. It's outfitted with quad-core 2.2 GHz processor and a 1920 x 1200 screen that delivers 323 pixels per inch and stunning, gorgeous quality. By comparison, the Nexus 7 offers a slower quad core processor running at 1.5 GHz, but the same resolution screen with the same pixels per inch. The screens are both gorgeous. In fact, looked at side-by-side, they may very well be identical.

The iPad mini with Retina provides an Apple-specific A7 processor that is hard to compare to the Android offerings. The iPad's bigger 8-inch screen provides a resolution of 2048 x 1536 resolution, which is obviously higher than that of the Nexus 7 or HDX. But it also provides basically the exact same pixel density, 326 vs. 323 for the Nexus 7/HDX, because of the bigger screen size.

Given the high quality of Apple gear, I think we can call this one a rough draw across the devices. More to the point, there is nothing about the HDX specs list that puts it over the top or eliminates it from consideration.

While the iPad mini(s), Nexus 7 and Kindle Fire HDX are all mini-tablets and ostensibly similar sizes, the HDX comes up short in some important areas. It is heavier than the Google device, weighing about 307 grams, compared to 290 grams for the Nexus 7. (The bigger iPad mini is 331 grams.) And it's thicker, at 9mm vs. 8.6 for the Nexus 7.

These may not seem like big differences. But they are indeed big in the real world, and there's something about the HDX's squatter form factor—the Nexus 7 is taller and less wide across the front—that makes it seem denser. The thinner Nexus 7 is also easier to hold, and the screen bezels are smaller on the sides, but bigger on the top and bottom, than the HDX's.

That said, the HDX does feature a beveled back that is strange looking but hand-friendly. And the power and volume buttons, which initially seem curiously placed on back bevels, are easy to reach and use after just a few uses. It's got a nice grippy back too, which I really like.

Overall, I think anyone could get used to any of these devices. Another draw.

When Amazon started selling its Kindle Fire tablets, the firm also launched its Appstore for Android, an alternative to what is now called the Google Play Store. At the time, I lauded Amazon for this move because Google's store was so awful, with no quality or reliability oversight at all, and it seemed like Amazon was bringing the benefits of Apple's closed App Store model to Android devices. (Users of other Android-based devices can install AppStore for Android on their handsets and tablets too.)

Today, the reverse is true. Google has dramatically improved its Play Store and I now prefer it over Appstore for Android by a wide margin. Google offers more apps—it's not even close—and more of the apps that I want to use. For example, only three Microsoft apps are available on Amazon's devices—Bing,  Wordament, and Xbox Smart Glass—while all 22 Microsoft apps for Android are available through the Play store, including SkyDrive, Microsoft Remote Desktop, OneNote, Outlook.com, Office Mobile, and more.

So Appstore for Android is now the worst of both worlds, with a locked-down app store like Apple's, with no (easy) way to get Google Play Store installed, and a tiny selection of apps.

One of the big draws of the Kindle tablets for Amazon users is that they tie so neatly into Amazon's content services. These include Kindle e-books (books, comic books/graphic novels, newspapers, and magazines), Audible audiobooks, Amazon MP3 (music with cloud-based locker support) and Amazon Instant Video (movies and TV shows, with a Prime Video Netflix-like subscription service). And while it's still fair to say that you receive a somewhat better Amazon experience on a Kindle Fire HDX than you will elsewhere, it's also fair to point out that most of this stuff is also available on Android generally (including the Nexus 7) and on iOS (including the iPad minis).

What this means in practice is that you don't need to buy a Kindle Fire of any kind to access most of this stuff. Android/Nexus 7 users have access to excellent Amazon, Kindle, Audible, and Amazon MP3 apps, and while Amazon Instant Video is not available, the Play Store is a great source of TV show and movie content and, let's face it, Netflix is better than Amazon Instant Video anyway. But iPad users get even more Amazon apps, including Amazon Instant Video, and the experience in some of those other Amazon apps—like Kindle—is as good as it is on the HDX.

So why would you pick an HDX?

From an Amazon content perspective, it may simply come down to familiarity. If you really are deeply invested in the whole Amazon experience, you're going to get it in droves—and right up front, as described below—on the HDX. The problem is that you'll get this in lieu of, or without the benefit of, the content ecosystems that are available elsewhere. So if you choose an HDX, you can't access Play Store or App Store/iTunes content. But on the other devices, you can do both (that is, access the device maker's stuff as well as the Amazon stuff.)

Frankly, despite my regular use of Amazon's services, I'm starting to find the whole Kindle device experience to be a bit much.

Like its predecessors, the Kindle Fire HDX uses Amazon's loathsome carousel-based user interface for its home screen, though it switches to a nicer looking grid of content if you jump into a content area. This carousel is perhaps the most tiring aspect of using a Kindle tablet, and though Amazon is now marketing its Android fork as "Fire OS 3.0" and touting the advances of this "content-first" UI, I think it's a waste of onscreen space.

More important, perhaps, the carousel places too much emphasis on the content you just accessed, hiding everything else. One of the nice things about a list or grid of on-device content (as opposed to just icons, please don't be confused by this) is that you can look elsewhere on the screen and be reminded of a book, game, or whatever that you purchased a while ago but have been inadvertently neglecting. The carousel hides such content.

As noted, the individual content views—Games, Apps, Books, Music, Videos and so on—are both nicer looking and more functional. But again, what you're seeing here is just a handheld version of the stuff Amazon sells online. So you can "Shop," but only at Amazon. The Games and Apps sections drop you into the lackluster Appstore for Android only. Books are Kindle. And so on. Some—mostly less technical Amazon-centric users—will of course appreciate and even prefer this kind of interface. But it's stifling if you can think for yourself.

I'm not going to insult your intelligence by describing some silly episode in which I use the HDX's MayDay "button" (really just a hidden menu choice, and not a physical device button) to see how quickly and well Amazon's sweatshop support staff could answer a ridiculous made-up question. "Duhhhh. I can't find a video I just bought. Can you help me?") If you're reading this site, you're not that dumb. That feature is made for the non-technical norms who Amazon sees as their typical customers. I'm increasingly uncomfortable even considering such an audience. I'm honestly not sure it even exists.

Amazon is also touting, bizarrely, and for the first time, the HDX's prowess as a productivity machine that you might actually use for work. Folks, that is even dumber than MayDay, and while it's certainly true that the device comes with Email, Calendar, Contacts, and other productivity apps, this is no work machine. It's a front-end to the Amazon ecosystem. Period.

On that note, the Kindle FreeTime app looks like a great parental control option, making this device an ideal choice for children. But this is Amazon, so of course there's also a Kindle FreeTime Unlimited subscription service that provides unlimited access to content from Disney, Nickelodeon, Sesame Street, PBS, and more, for just the low, low, low payment of $2.99 per month. At least it's optional.

If it sounds like I'm souring on the whole Kindle tablet thing, well, maybe I have. I see the quality and value of it. But with so many of the Kindle services I use available elsewhere, the cloying and Amazon-centric restrictions on this device can no longer be forgiven. This is awkward for me as I've always used and recommended Amazon's devices, and I still use and prefer the Kindle Paperwhite for reading newspapers and books. But there it is.

You'll note that I've not made any comparisons to a Windows-based mini-tablet in this review. That's by design. As you'll see in my coming Dell Venue 8 Pro review, I'm not sure the first crop of Windows mini-tablets is completely comparable to the HDX, Nexus 7 or iPad mini, for a variety of reasons. But we'll get to that soon enough.

The Kindle Fire HDX is a nicely-made device and a great value at a starting price of just $229. It's also the nicest Kindle tablet that Amazon has ever sold. But discerning users—and most readers of this site, really—would be better off with a Google Nexus 7. (And anyone who would mortgage their house to buy an iPad mini with Retina Display isn't listening to my advice anyway.)

The Kindle Fire HDX is recommended for those who prefer or can look past the heavily Amazon-centric nature of the device's user experience. But if Amazon allowed users to install the Google Play Store, I would recommend this device with much less reservation.