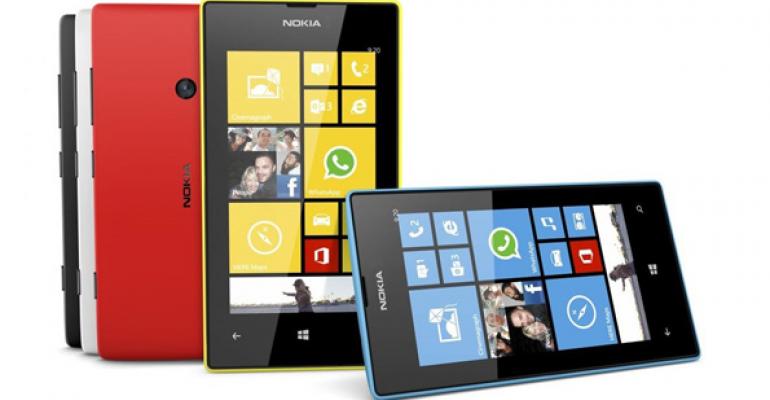 Windows Phone Price Point: How Low Can It Go?

How about $99 with no contract?

Over the past few weeks, I’ve been considering whether Windows Phone’s road to success is going to be paved on the backs of low-cost, no-contract phones. And this week that notion got a major boost when AT&T announced it would offer the tremendous Lumia 520 for just $99. With no contract.

This $99 price point is a better deal than the $125-$150 you could pay for a T-Mobile-based Lumia 521, a variant of the 520. I wrote about this phone recently in Nokia Lumia 521 First Impressions and Photos and will be reviewing it this week.

The $99 Lumia 520 deal starts this Friday when AT&T’s GoPhone service adds the device to its pre-paid phone lineup. For that contract-less price, you get a great entry-level phone with great specs for this market, Nokia HERE apps like Drive, Maps, and Transit, and Nokia Music with free streaming.

Those specs include a 1 GHz dual-core processor, a 4-inch IPS display with 800 x 480 resolution, 512 MB of RAM, and 8 GB of internal storage (with support for up to 64 GB of additional storage via micro-SD).

According to AT&T, the Lumia 520 is “4G-capable,” which I take to mean HSPA/HSPA+ and not LTE. (They would have called out LTE support.) The firm’s GoPhone service offers a variety of inexpensive, pay-as-you-go options.

My only concern, naturally, is that this race to the bottom is what ultimately killed the market for high quality PCs. But I’ll worry about that when Windows Phone has more than 3-4 percent market share. For now, the goal is to get users onboard. This may be a viable plan.