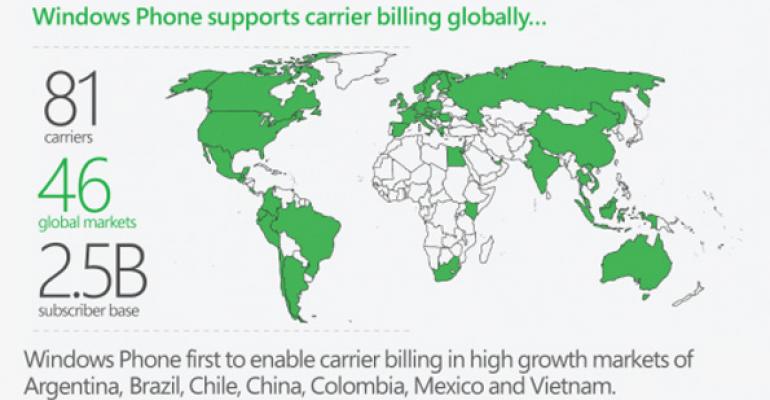 And on Verizon, too, which is sort of an emerging market

This past week, Microsoft announced that it now supports carrier billing for Windows Phone app purchases in the top emerging markets, a key component of its strategy to reach the "next 5 billion" smart phone users. This is complementary to the firm's affordable hardware pricing strategy and could help Windows Phone make headway against Android in price-sensitive markets.

If you live in an established market like the United States, Western Europe, or elsewhere, you may not immediately understand why this is a big deal. But according to WorldBank and Microsoft, an estimated 93 percent of people in emerging markets do not have a credit card, so carrier billing for apps and other on-device content is huge.

And check this out: Windows Phone is actually the first mobile platform to support carrier billing in big emerging markets like Brazil, Chile, China, Mexico and Vietnam. For now, at least, this is a huge advantage.

"China Mobile alone is estimated to serve nearly 800 million customers, including millions of Windows Phone users," Microsoft General Manager Todd Brix writes in a post to The Official Microsoft Blog. "The largest carrier in the US, Verizon Wireless, has also added Windows Phone to the platforms it supports with carrier billing."

Microsoft's reach with carrier billing capabilities is pretty impressive: 81 carriers in 46 markets, and with a combined subscriber base of 2.6 billion, or about percent of all subscribers worldwide. (These aren't Windows Phone numbers, of course, but rather the size of the combined wireless carriers' subscriber bases.) The firm notes too that over 60 percent of all paid Windows Phone transactions are made via carrier billing.

And in case you were wondering about the soundness of focusing on the low-end smart phones that sell well in such markets, Microsoft highlights Canalys research that the growth rate of smart phones sales in emerging markets will be 15 percent through 2017, a figure that is 2.2 times higher than that in more established markets. Canalys further predicts that Windows Phone shipments will increase by 77 percent in emerging markets and by 41 percent for developed markets during the same time span, Microsoft says.

Brix makes the case for this strategy as well.

"The prospects for Windows Phone are strong in part because Microsoft understands where the next 5 billion smartphone customers will come from," he writes. "We're delivering rich experiences across a diverse global product portfolio that is backed by a Store that combines flexible monetization choices for developers with simple payment options for consumers."

And that, folks, is why we didn't see any high-end Lumia smart phones in the second half of 2014. These devices don't sell well in established markets and would be non-starters where the volume sales are now: Emerging markets.