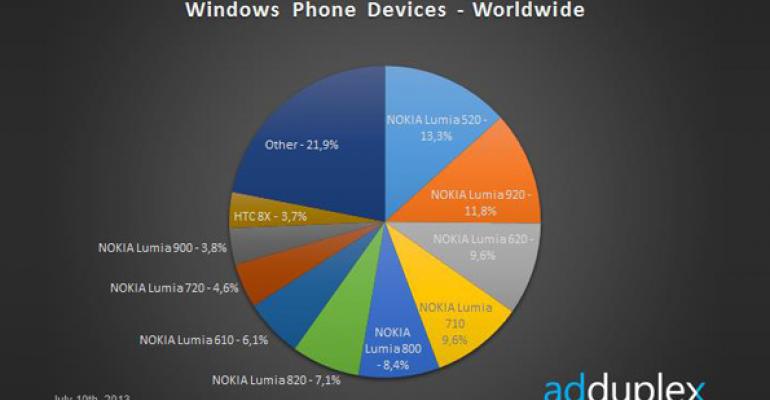 Some trends from this month’s report, which will be live Monday, include:

Lumia 520 surges to number one. Though AdDuplex indicated this was going to happen, everyone should be both amazed and pleased that the Nokia Lumia 520 is already the most-often-used Windows Phone handset overall. That’s because this budget Windows Phone 8 device (with an amazing feature-set for its price) is a good indication of where the platform can really be successful. The 520 is the perfect combination of price (the US-based 521 can be had for just $125 with no contract) and functionality (the superior combination of Windows Phone 8 and Nokia apps and services, duh). This is great news all around. Since fully one-fifth of all new app installs happen on the 52x now, and Lumia 521 usage has doubled month over month, I will be reviewing the Lumia 521 soon.

Lumia 620 surges to number three. On a similar vein, the also budget-minded Lumia 620 has jumped up to the number three position, with 9.6 percent usage (compared to 13.3 percent for the 520), meaning that Nokia’s most inexpensive Lumias are now both in the top three, while all three of the top Windows Phone devices, by usage, are Nokia devices running the latest version of the OS.

Lumia 920 dips to number two. Nokia’s current worldwide hero phone, the Lumia 920, has slipped from its number one position to take the number two spot with 11.8 percent usage. Here’s what’s interesting: That’s basically the same exact usage share as last month, so it’s not so much that the 920 is less frequently used, it’s that 520 and 620 usage has surged so strongly.

Nokia rises. With Nokia dominating Windows Phone usage overall, one might think that there’s nowhere to go but down, usage wise. But thanks to the success of the Lumia 520 and 620, Nokia actually gained again in usage this month, and now controls 85.4 percent of all Windows Phone usage.

Verizon is number one in the US. Despite Nokia’s continued prostration before the AT&T altar, it is Verizon, and not AT&T, that controls Windows Phone usage. And that Verizon continually lags behind AT&T when it comes to getting new phones perhaps suggests that the gap would be even bigger if those roles were reversed. Verizon controls 43 percent of US-based Windows Phone usage, compared to 36 percent for AT&T, 15 percent for T-Mobile and 6 percent for “other.”

What this data—combined with my understanding of previous months’ data—tells me is that we now have, perhaps, a recipe for Windows Phone success. Not surprisingly, perhaps, it follows the model established in the PC market.

It goes like this: Price matters. And phones that combined low-ball pricing—the Lumia 520/521 and 620—with broad availability and a high-end feature set—Windows Phone + Nokia apps and services—are well positioned for volume sales.

This is a big difference from Microsoft’s original strategy for Windows Phone, which was to focus on the high-end of the smart phone market. Obviously, Nokia makes devices that serve all customer groups—the Lumia 1020 being the latest rendition of a specialty, high-end device—but its aggressive move to a new type of product, low-end pricing-wise but high-end feature-wise, is paying off.

You can draw parallels between this change and what happened in the PC market, where netbooks kicked off a sales surge for PCs that continues to this day though the cheap PCs we now buy are no longer called netbooks. Of course, where Windows kicked Linux out of the netbook/PC market, Windows Phone is going to have a harder time doing the same to Android. For one thing, Android, unlike Linux, is actually dominant and is usable by normal people. For another, the handset market is controlled by wireless carriers, which can somewhat arbitrarily (at least from the consumer’s perspective) push certain phones, or even certain platforms, over others.

Am I suggesting that Windows Phone ever going to catch up with Android? No. But the market is big enough, and growing, for Windows Phone to experiencing big growth. And these great new phones are key to that potential success.