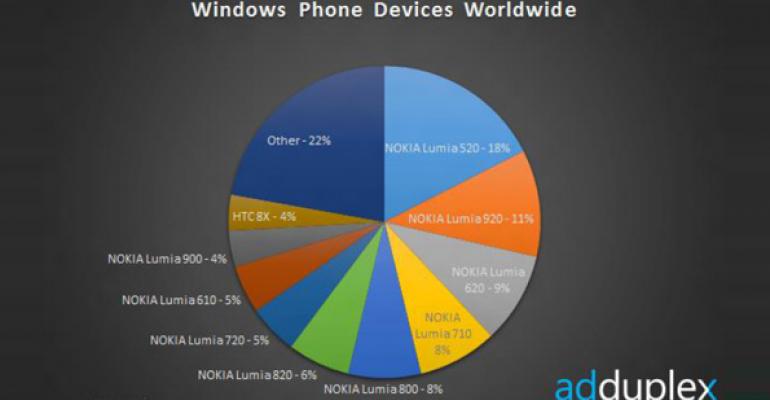 Some trends from this month’s report, include:

Lumia 1020. Nokia’s new flagship offering, the Lumia 1020, was launched just at the end of July so it’s no surprise that the device barely registers in the charts: It comes in at number 32, or number 16 if you look just at Windows Phone 8 handsets. But AdDuplex says that when you compare the US-only launch of the 1020 to the previous US-only flagship launch—that for the Lumia 920—something interesting emerges: The 1020 is actually doing as well or better over time than its predecessor.

512 MB vs. 1 GB. New this month, AdDuplex looks at how much memory is shipping Windows Phone handsets. Thanks I’m sure to the success of low-end devices like the Lumia 520 and 620, 57 percent of Windows Phones in use have 512 MB of RAM, compared to 43 percent with 1 GB.

US carriers. Verizon is still number one in the US with 39 percent of the market, compared to 34 percent for AT&T. But thanks to the release of the Lumia 521, T-Mobile usage has jumped to 19 percent, triggering usage losses in the top two carriers.