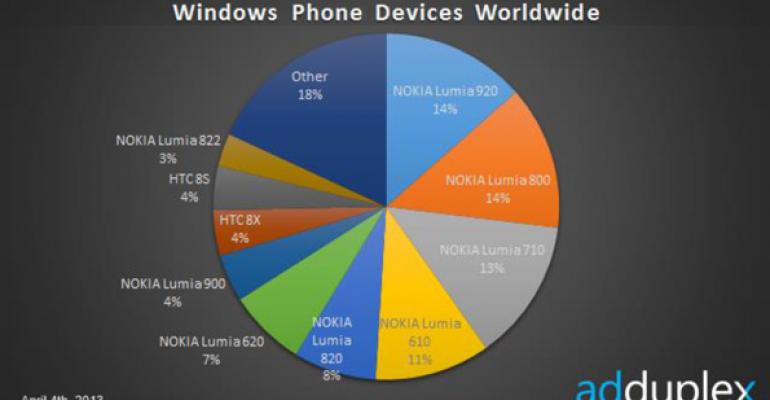 Well, it took about five months, but the Nokia Lumia 920 is now the most popular Windows Phone handset, according to usage statistics provided by AdDuplex. That and some other interesting tidbits are available in this month’s peek at Windows Phone usage.

From this month’s report, which will be live sometime this week:

Lumia 920 is number one. According to AdDuplex, the Nokia Lumia 920 is now the most used Windows Phone device in the world, beating out previous leader Lumia 800 by a tiny margin. Still, this is a big win given that the 920 was only at number 4 a month ago.

Top five is all Nokia. Increasingly, the Windows Phone market is Nokia and then a couple of much smaller players. This month, the top 5 Windows Phone devices—Lumia 920, Lumia 800, Lumia 710, Lumia 610, and Lumia 820—and 8 of the top 10 are all made by Nokia. Actually, the top seven are Nokia devices—the Lumia 620 and 900 round out the list—with the HTC Windows Phone 8X coming in at number 8. 80 percent of the Windows Phones in use are made by Nokia (with 14 percent by HTC).

Lower-end phones are coming on strong. While the most expensive Windows Phone (the 920) is currently the most popular, AdDuplex expects this to change as Nokia’s new and existing low-end devices (the Lumia 720, 520, and 620) start popping up around the world. Case in point: The Lumia 620 has already jumped from 2 percent usage share to 7 percent in just one month.

Windows Phone 8 growth is accelerating. This month, 43 percent of all Windows Phones in use are running Windows Phone 8, up from just 31 percent a month ago, more than double the growth of the previous month. In some countries—France, USA, Singapore, Hong Kong, Australia, the UK, Switzerland, and Germany—Windows Phone 8 usage is much higher, in the 60-70 percent range.

US usage. In the United States, the top five Windows Phone handsets are the Nokia Lumia 822 (22 percent), Lumia 920 (20 percent), HTC 8X (16 percent), Lumia 900 (8 percent) and Lumia 710 (6 percent). This is largely unchanged from last month. That said, Nokia jumped 2 percentage points to 66 percent of the US market at the expense of Samsung; HTC remains unchanged at 26 percent.