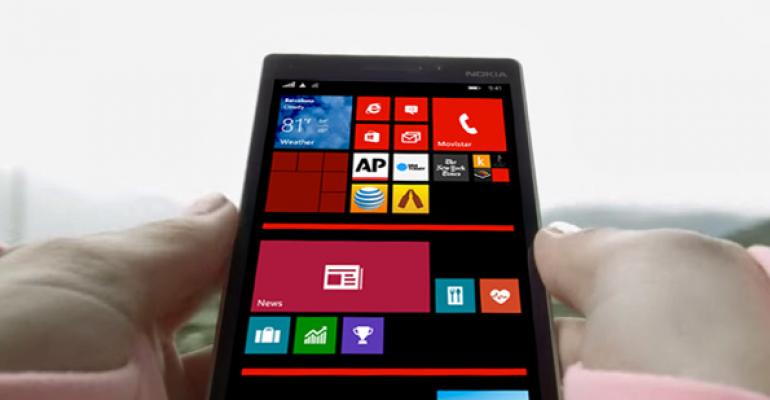 Sometimes it's the little things

The upgrade took somewhere in the 20-30 minute range for each phone, mostly because of the slowness of the connection here. If you're familiar with Windows Phone upgrades, you know that Microsoft really does an OS migration, where you are essentially doing a clean install of the OS and then migrating your apps and data back when the upgrade is complete. For this reason, you will need to wait a bit for some apps to be updated as well. But the whole thing works generally well. (At least it did in my case.)

At first blush, nothing has changed. Of course, this is true with very big upgrades like Windows Phone 8.1, and as with that update, you sort of need to know where to look to see what's new. Two obvious choice emerge.

The first is Live Folders, which work much like folders in iOS and Android. To create a Live Folder, just tap and hold on a live tile as you would to remove, resize or move it, and then drag it onto another live tile.

You can name folders (or not), move and resize tiles within folders, and do all the things you'd expect. Folders open in-line on the Start screen when you tap them, again, as expected.

The second obvious thing to experiment with is Internet Explorer because, as noted in Windows Phone 8.1 Update 1: Internet Explorer, this is a major area of improvement in this release. This is easier to test if you have two Windows Phones side-by-side, one running Update 1 and one running a previous version, but the net result is that IE 11 now handles mobile sites a lot better than before, often by emulating iPhone's Safari browser.

Here's a side-by-side showing the Twitter web site on Update 1 (left) and before Update 1 (right). Note that these devices have different screen resolutions.

Looking through the promised list of changes, I went straight for Xbox Music, which as any user will tell you is (politely speaking) a train wreck in Windows Phone 8.1. I didn't notice any changes at all, and indeed it is as slow and terrible as ever. But looking at the About information, I can see that this app has in fact not been updated at all; it's the same version as the one I have on my 8.1 GA handset. So we can assume that the update(s) for that app will be delivered over the air in the future, I guess. Moving on.

I couldn't find the "consumer VPN" feature that Microsoft told me about, and the VPN Settings app looks and works just like stock 8.1, so I'll need to keep digging. But Apps Corner is in there, and you can configure your phone to limit app selection to a list you configure, customize the Start screen, and impose other restrictions. This could be useful in retail/kiosk situations, of course, but also for children, I bet.

Cortana does impersonations now. They're cute, but get old quick, especially when she repeated the Yoda line, "when 900 years old you reach, look as good you will not" three times in a row. Sigh.

I'll keep looking for new bits, but the big deal here, I think, isn't so much whatever minor updates are included but rather that Microsoft is serious about continually improving Windows Phone. As anyone who suffered through years of few updates will tell you, things have really gotten better in the last year or so. And this update shows that Microsoft intends to keep the updates coming. It's appreciated.