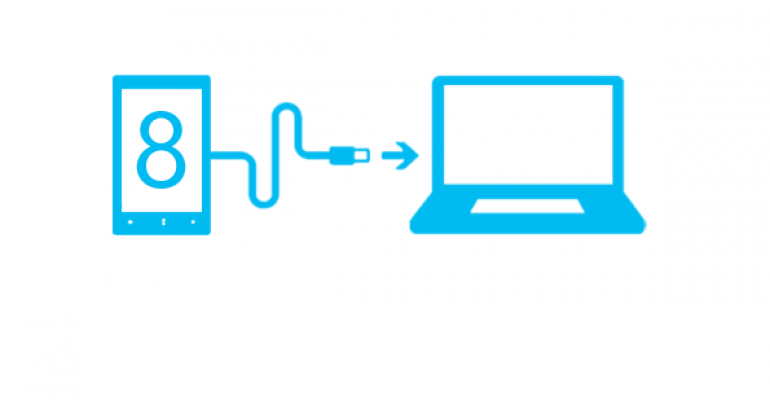 It used to be so simple: When it came to syncing your Windows Phone 7.x handset to the PC, you used the Zune PC software, love it or hate it. With Windows Phone 8, however, Zune is out of the picture. And while your PC sync options have in many ways expanded, they’ve conversely gotten less integrated. This is, believe it or not, by design, as Windows Phone 8 is really designed to be more of a standalone system than its predecessor.

To recap, here’s how it worked in Windows Phone 7.x: You could connect your handset to the PC via USB (or, optionally, via Wi-Fi) in order to sync music (and ringtones), videos, pictures, podcasts, and, when available, software updates to the device. You could also sync content back to the PC from the phone, including photos taken with the device’s camera, pictures downloaded to the device’s storage from the web, and songs downloaded or purchased over-the-air through Zune Marketplace/Zune Music Pass on the device.

In Windows Phone 8, the Zune PC software is no longer an option, at least not explicitly/directly: You cannot sync your phone with this software at all, and neither recognizes the other. (If you’re a fan of Zune, you can of course continue to manage your PC-based music collection with this software. It still works with the now-renamed Xbox Music Pass, and you can sync content to your Windows Phone 8 handset using one or more of the methods described below.)

Here are your PC sync options for Windows Phone 8, the solutions you can use to get content to and from your handset using different Windows versions (Windows 7, 8, and RT, mostly, but probably XP and Vista too).

Works with: Windows 8 and RT

The Metro-style Windows Phone app, available for free from the Windows Store, lets you sync content (photos, music, videos) to and from your phone, automatically or manually. It’s pretty basic, compared to Zune, but even compared to the desktop application (noted below), it’s lacking some key features like support for music playlists. This is by design: Windows Phone 8 is designed to be used largely PC-free.

I looked at this app more closely in Windows Phone 8 Tip: PC Sync.

Works with: Windows 8 and 7

The Windows Phone desktop application, currently in beta, works much like the Metro-style app, but it actually provides additional functionality when compared to the Metro app. You can sync content between Windows Media Player/Zune or iTunes collections, which is helpful for those who use iTunes, in particular. (I wrote about this latter functionality in Windows Phone 8 Tip: Enjoy Podcasts on the Go.) And it works explicitly with both ringtones and podcasts.

Works with: Windows 8, 7, RT, and probably Vista and XP

Windows Phone 8 finally support direct access via File Explorer in Windows 8 or RT (or Windows Explorer in older OSes), letting you drag and drop content to and from the device as you would with any USB-based hard drive or memory stick.

Works with: Windows 8 and 7

While you are free to use the Windows Phone app or desktop application to automatically copy photos (and other pictures) from the device to the PC, this functionality is very limited: You can’t rename the files on import or create event-based folder structures. Instead, everything is dumped in a folder called From Paul's HTC 8X (or similar) and the photos, all in one folder, have terrible names like WP_20121029_001.jpg.