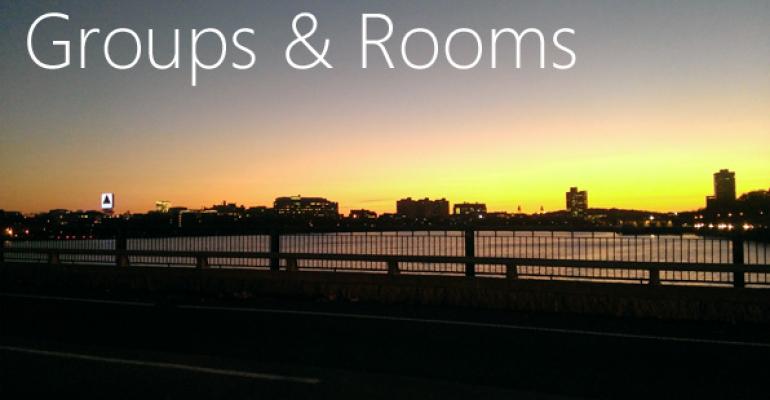 In keeping with its highly personalized and integrated foundations, Windows Phone 8 offers even more ways to share information only with certain people. Key to this functionality is an improved Groups feature and a new feature called Rooms.

Groups and Rooms are both ways to group two or more contacts into logical entities that you can access at once. However, they differ in some subtle but important ways. Groups are meant to mirror real-world relationships—co-workers, teammates, high-school friends, whatever—whose activities you wish to follow together, or whom you wish to communicate with all at once. Rooms, meanwhile, a more personal way to share with others who are close to you, and ideally are others who also use Windows Phone 8 handsets. It’s a good choice for families, especially.

So how do you choose between the two? That’s a tip within a tip: Aside from the Windows Phone 8 requirement, Rooms are for people who will also want to share and communicate with each other and not just with you. That is, you can and should use Groups to share with others and to follow others’ activities online … on a one to one basis. But Rooms is a formalized form of group sharing, where the members of the room will share with each other, and not just with you.

Both can be pinned to your Start screen for easy access.

Available in previous Windows Phone versions, Groups are exactly what they sound like: Groups of contacts. You create a group for two basic reasons: Because you wish to follow the members of that group in a single place, and because you wish to communicate with them all simultaneously. Groups are a concept that began first with Windows Live Messenger, but in Windows Phone 8, these groups now sync to your Microsoft account, so you will see them elsewhere, too, including Hotmail or Outlook.com.

You can access your groups (and room) from the Together panel in the People hub.

To create a group, open the People hub, ensure the Together panel is displayed, and then tap the New app bar button. From the Add New screen, choose Group.

Then, name the group and, in the Edit Group screen, add two or more members.

You can also send text (and chat) messages and emails to each member in the group from the People hub. Or you can do so from the Messaging and Email apps, respectively: Just type the group name in the To: field of a new text message or email. These capabilities mean that you can easily share many items with a group, too. If you want to share a photo with everyone in a group, you can do so via Messaging or an email account.

Rooms is more powerful than Groups, but it’s also a bit more complex. In this case, you get the same what’s new feed and photos feed as with groups. But you also get shared chat (accessible via the room in People or in Messaging), shared calendar (in People and in Calendar), shared photos (in People and in Photos), and shared notes (in People and in Outlook Mobile), all in a unique People hub-hosted environment.

Rooms are invitation-only, and for the most part, the recipients each need to be using Windows Phone 8 for the best experience. (I’ll only be discussing this in the context of Windows Phone 8, but be sure to check out Microsoft’s post Tips for using Rooms on other phones for more information for non-Windows Phone 8 handsets.) And room members have to explicitly agree to be in the room with you: If they ignore or decline the invitation, then they’re not part of the room.

Rooms can be found alongside Groups in People, Together. As with Groups, you start a new room by tapping the New app bar button in this view, just choose Room from the Add New screen. Each room gets a name and then, after a somewhat lengthy wait while the room is configured on your phone, you can start inviting members via text messaging.

In addition to the shared items mentioned above, each room is a customizable environment with a background image. But only the person who created a room can add other members and remove members.