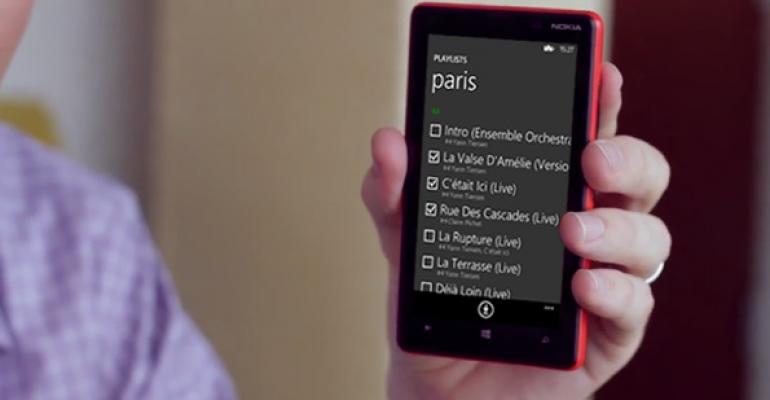 A lot of low-level fixes, plus some needed functional changes

Note: I added some information about the GDR2 changes to Xbox Music in Windows Phone 8 in my free eBook, Paul Thurrott's Windows Phone 8. Portions of this article are excerpted from that book, while other parts are a more general overview of other changes.

In pre-GDR2 versions of Windows Phone 8, you can select one or more songs in an artist or genre view, but not while viewing a playlist. This means it is next to impossible to download a playlist from your cloud collection to your phone. But with GDR2, a Select app bar button, and corresponding Select All app bar menu item, make it a breeze to download individual songs in a playlist or the entire playlist.

To download an individual song in a playlist, tap and hold on the song and then choose Download from the pop-up menu that appears.

Downloading multiple songs in a playlist (or other Music view) is a multi-step process. First, tap the Select app bar button.

When you do, selection boxes will appear next to each song.

Tap in the appropriate selection boxes to select the songs you wish to download. Then, tap the Download app bar button.

Progress bars will appear under each song and the downloading will be indicated as it happens.

When the downloading is complete, the streaming icon that appeared next to each song will be missing, indicating that the song is on the device.

A number of changes have been made behind-the-scenes, so to speak, to make the Xbox Music experience more reliable and enjoyable in GDR2. These include:

Meta-data improvements. With GDR2, there are fewer instances of the wrong album art showing up and albums accidentally getting split into two on your phone. (However, if you were seeing this problem previously and upgrader to GDR2, you will need to update to the latest version of the Windows Phone companion app on Windows and then delete all the music on your phone and resync.) Additionally, Windows Phone will no longer overwrite artists, songs, or albums metadata. Instead, metadata changes are only made to your own music if a synced track is missing key information.

Duplicate song fix. Microsoft says it fixed a bug that caused duplicate songs to appear on phones when users copied over a song from their PC that also exists in their cloud collection. However, if you are already experiencing this bug and upgrade to GDR2, you will need to update to the latest version of the Windows Phone companion app on Windows and then delete all the music on your phone and resync.

Less skipping when streaming music. Streamed music is less likely to skip or pause once the GDR2 update is installed because the phone starts fetching the next track before the current one you’re listening to fades out.