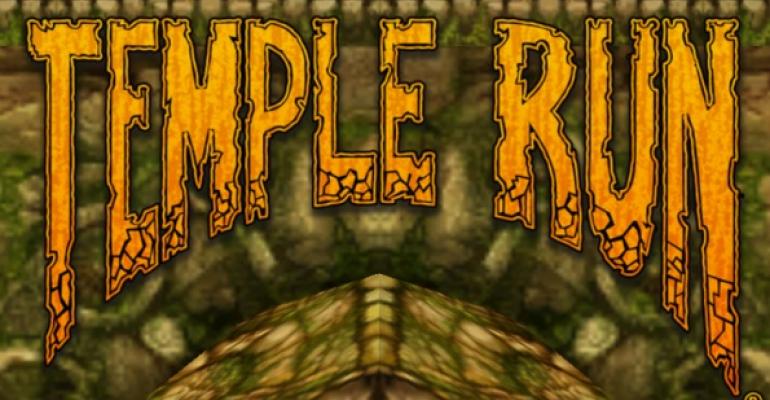 The first game in my series of Windows Phone 8 app picks, Temple Run is immediately familiar. After all, it was released on the iPhone fully 18 months ago. But don’t let its late arrival on Windows Phone bother you too much: There’s a reason why Temple Run is such a big deal. It’s a great mobile game experience.

Windows Phone users, alas, are used to great apps appearing late on their favorite platform. (Or in some painful examples—cough, Instagram—not at all.) There are two ways to look at this. In the glass half empty view, this lateness points to the fundamental problem with Windows Phone, and by highlighting such apps, as I’m doing here, we’re really just highlighting how backwards this platform is. But looking for a moment at the glass half full, let’s just agree that we’d rather have these apps late than not at all.

And Temple Run, despite some flaws, was worth the wait.

Aside from the painful timing—Temple Run II just appeared on iPhone/iPad in January, so we can expect a 2016 arrival on Windows Phone, presumably—the one major issue I can point to is that Temple Run isn’t an Xbox LIVE game. That means two things for Windows Phone users. One, there are no Xbox LIVE achievements. And two, the game is relegated to the ghetto of “other” games in the Collection list in the Windows Phone Games hub. That means a lot of scrolling for those with plenty of games on their handsets.

Get over it, people. Temple Run is free on Windows Phone 8. And it’s great fun, at least within the context of a mobile game. That is, it’s a great way to pass the time in those “off” times where you’re standing in line, waiting to board a plane, or whatever. It’s something you can easily jump in and out of—kind of like “Call of Duty” multiplayer—with no worries about remembering plot or characters.

For the uninitiated, Temple Run is what’s called an “infinite running” video game in which the action moves inexorably forward—as opposed to similar side-scrollers—and you must maneuver the on-screen character over, around, and under obstacles while collecting objects that include what are essentially coins as well as the obvious power-ups. It sounds simple, because it is, but it’s also addictive, thanks to some very precise touch gestures. These include swiping up to jump, swiping down to slide, swiping left and right to turn, and device tilt to move to the left and right without turning.

Chances are, you or someone you know has become addicted to Temple Run or one of its many clones on iOS and Android. And if you’re using Windows Phone 8, now you can find out why.