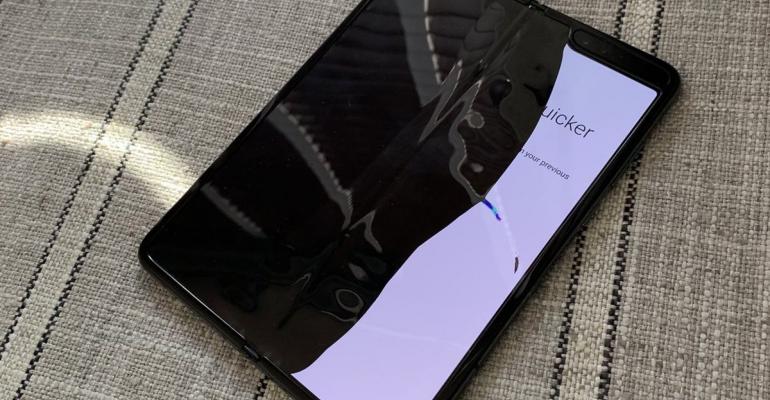 Why Samsung Had to Delay the Galaxy Foldable Phone

Problems with the Fold screen would be a dealbreaker all on their own. But the issues go deeper. As a phone, it’s not good enough.

(Bloomberg) -- Samsung Electronics Co. on Monday delayed the Galaxy Fold, a $1,980 device that unfolds from a smartphone into a small tablet. After one review unit loaned to Bloomberg News stopped working two days into a test, and a replacement revealed other limitations, it's clear why the Korean technology giant is delaying the launch.

Problems with the Fold screen would be a dealbreaker all on their own. But the issues go deeper. As a phone, it’s not good enough. As a tablet, there are also too many drawbacks. As a combined device that can morph between the two, the Galaxy Fold is an intriguing sneak peek at what might be possible in the future of mobile computing -- but probably not for years.

The first Fold review model arrived April 15. It was an exciting moment. In a world awash with black, shiny rectangles from Apple Inc., Google and others, Samsung was at least trying something different.

However, it quickly became apparent that compromises had been made. When using the phone in folded format, the device was thick and somewhat cumbersome — about the width of two regular smartphones. The 4.3-inch screen wasn’t useful for much beyond making and receiving calls; it’s too narrow for typing anything other than quick messages. The front display also looked odd compared with today’s full-screen phones, with very thick top and bottom bezels. Beyond that, the front glass seemed as durable as other smartphones.

Unfolding the gadget revealed a large, bright and colorful display. But that’s when the serious flaws emerged. The inside screen had a plastic film that looked like a screen protector or any other thin piece of plastic that would come on a new phone, tablet or TV set when you take it out of the box. This protective layer began to peel in the left corner and the natural urge was to remove it. Once the film was off, the display started failing almost immediately. Samsung did not tell reviewers to keep this film on the device, nor did the packaging warn users against removing it.

A day later, the left side of the folding display stopped functioning. Later that night, about three-quarters of the right side of the screen went black. By the next morning, the entire folding screen was dead. A small tear also developed at the top of the hinge. Poking at this may have contributed to the display problems. Still, a thin film should not be the difference between a $1,980 phone working and completely malfunctioning.

After several reviewers complained, Samsung asked to pick up the broken Fold on Thursday. It provided a replacement a day later. The second unit had no warnings about the crucial screen protector, but Samsung said last week it will make this requirement clear to consumers.

Other small marks appeared across the screen as well, suggesting the Fold may not hold up well over time. There’s also a lot of glare and reflection, which makes viewing difficult in some lighting conditions.

The screen also had a noticeable crease across the center where it folds. When watching video, the crease wasn’t that visible. But you can see it when doing other things such as reading a blog post or tapping through an app.

While not perfect, the software was the most polished part of the Galaxy Fold experience. Many apps seamlessly transitioned from the small screen to the unfolded screen (though you’ll rarely use that smaller screen). Some of the operating system’s built-in functions also took advantage of the larger screen. Taking pictures with the very good camera by using a larger view finder was a great experience. The bigger screen also made it a go-to viewing device for the NBA Playoffs this weekend. The ability to run three apps at once and move them around to your liking works well once you set it up and get used to the interface.

After almost a week with the Galaxy Fold, Samsung’s effort feels like a concept device, not a finished product. The display had far too many flaws. The ability to have both a phone and a tablet in your pocket is a fascinating idea, but it’s still just an idea.

The Galaxy Fold bursts with potential. Either Samsung or another company will eventually perfect it. If such a device can master being both a phone and a tablet, with optimized software and without those display flaws, it could be the next big mobile hit.