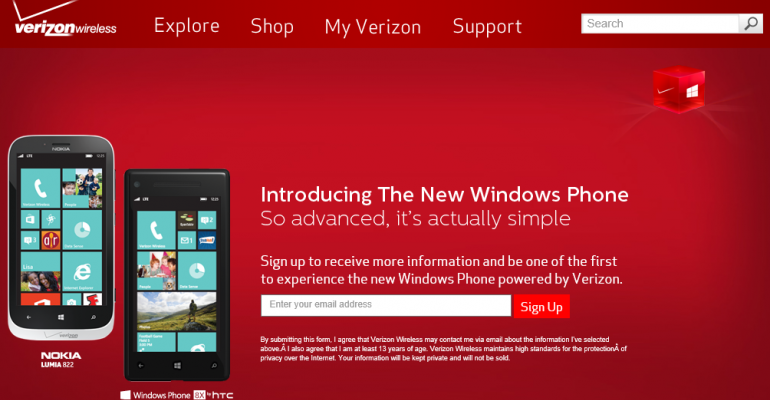 I like Verizon’s tagline for Windows Phone 8: “So advanced, it’s actually simple.” Nice.

The HTC 8X is of course a flagship device and my preferred Windows Phone 8 handset. If you’re on Verizon and have been pining for an update to the now-ancient HTC Trophy, this is it: You’re going to be shocked at the build quality of this device. It’s just gorgeous.

But don’t discount the Lumia 822. While it’s not a flagship phone, and appears to be a Verizon branded version of the Lumia 820, and comes with a fairly low-end 4.3 screen running at just 800 x 480 (as opposed to the 720p display on the 8X) and 16 GB of storage, it does have a removable battery, expandable storage via micro-SD, and wireless charging. Yes, I will be reviewing the 822 soon.

Verizon will be selling three Windows Phone handsets this holiday season. The third, a mysterious new Samsung called the ATIV Odyssey, will go on sale in December. No details about that device are yet available, but I’m starting to wonder if it’s not just a Verizon-branded version of the ATIV-S, which is indeed a flagship phone and a potentially very interesting device.

Visit this page starting on Friday to preorder a Windows Phone 8 handset on Verizon. You know you want one.