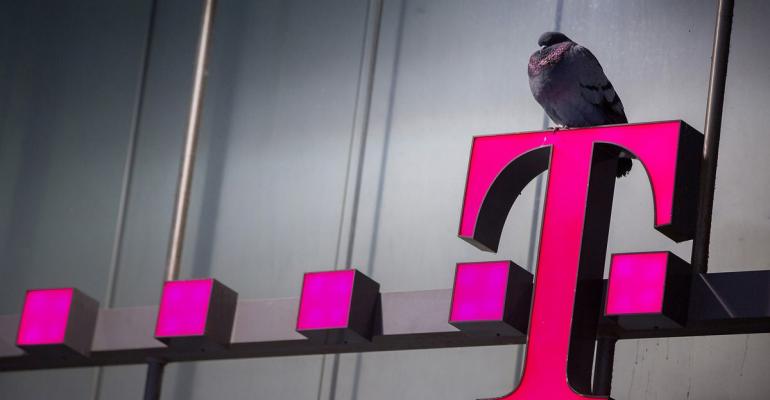 T-Mobile US Inc. and its German owners are advancing toward a long-awaited telecommunications union that would value merger partner Sprint Corp. at about $24 billion, according to people with knowledge of the matter.

(Bloomberg) --T-Mobile US Inc. and its German owners are advancing toward a long-awaited telecommunications union that would value merger partner Sprint Corp. at about $24 billion, according to people with knowledge of the matter.

Under the terms being discussed, T-Mobile backer Deutsche Telekom AG would receive a 42 percent stake and 69 percent voting interest in the combined company, said the people, who asked not to be identified because the talks are private.

At $24 billion, the deal would value Sprint shares at about $6.10 apiece. That value may change depending on stock market fluctuations, since Sprint investors will get stock in the combined company at a fixed ratio. CNBC reported late Friday that the price could be about $6.50 a share, in line with Friday’s close. Sprint shares fell as low as $5.56 Friday and then rebounded to $6 as investors speculated on the deal terms.

T-Mobile Chief Executive Officer John Legere will run the combined company, which will have dual headquarters in Bellevue, Washington, and Kansas City, CNBC reported Saturday, citing an unidentified person familiar with the matter. Some Sprint executives are expected to remain with the company, CNBC said.

The latest discussions follow years of will-they-won’t-they merger deliberations. The two sides restarted talks in recent weeks, about five months after an earlier attempt collapsed. The previous negotiations broke down after the companies couldn’t agree on how to structure control of the combined entity, people familiar with the matter said at the time.

Shares of both companies climbed earlier on Friday after Reuters said that an agreement could be reached as soon as next week. The report sent Sprint up as much as 10 percent, while T-Mobile climbed 2.5 percent.

Any new proposal would have to address the concerns that the Justice Department and the Federal Communications Commission had almost four years ago, when they rejected a previous attempt by SoftBank Chairman Masayoshi Son to merge the two carriers. At that time, both agencies took the position that competition could be harmed if the number of national carriers shrank to three from four.

More recently, the Justice Department sued to block AT&T Inc.’s takeover of Time Warner Inc. And the Trump administration spurned what would have been the largest tech deal ever, standing in the way of Singapore-based Broadcom Ltd.’s attempted purchase of Qualcomm Inc. earlier this year. The move was aimed at preventing China from gaining an advantage over the U.S.