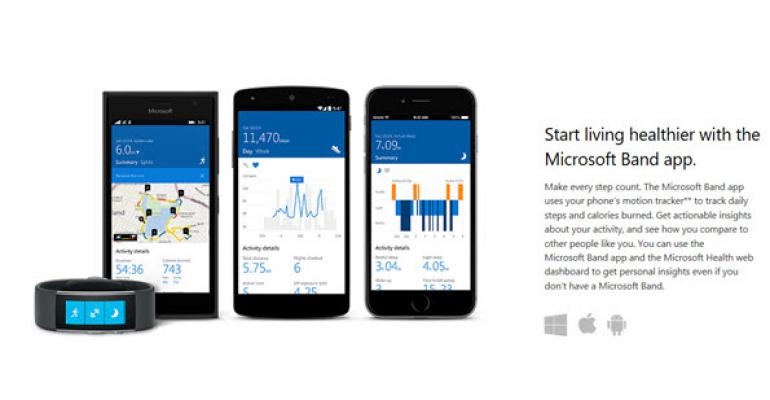 The State of the Microsoft Health Platform

The recently rumored news that Microsoft will back away from its fitness hardware (read: Microsoft Band) and put focus back on its Health platform stoked my interest for figuring out where the company’s technology and services actually stand. As a sort of State-of-the-Union address, I can cut to the chase and say that the overall picture is not good. And, maybe that’s why the company may be backing down from delivering devices. It needs to get rid of distractions so that it can get back to improving a critical piece of the ecosystem. And, really, the Microsoft Band hardware was a distraction.

People tend to forget that the Microsoft Band was created solely to demonstrate the sensors Microsoft developed and also to better expose its near unknown Health platform to audiences that had never heard of it. The introduction of the Microsoft Band took focus away from HealthVault and instead heaped it on a consumer-sided offering in both hardware and software. HealthVault lost focus to the Microsoft Health Dashboard.

According to a new statement on its Microsoft Health web site, Microsoft is clearly renewing its focus on HealthVault. And, for good reason…I spent the last couple days working with it and its atrocious.

For US-based citizens, Microsoft HealthVault is similar to MyChart. Most doctors in the US use MyChart and I believe there’s a similar service in the UK. MyChart is where patient records are stored. Long gone are the days where a paper file folder was passed between doctors. Instead, MyChart stores the records electronically, allowing both doctors and patients to review health status.

Microsoft HealthVault was developed and introduced in October 2007 and in June 2010 expanded its services beyond the United States to include the United Kingdom. But, since then, it’s difficult to understand if any real advancements have been made in the platform. As an example, I was surprised yesterday to find that the HealthVault app for Windows 10 actually uses Windows Hello for security.

During the last few days trying to figure out where Microsoft’s offering currently stands, I’ve been accosted by a slow web site, a slow and difficult to use app, incomplete information, a lot of manual entry, and a supposedly open platform with an app that currently only supports Windows (there’s no iOS or Android app).

Like the Microsoft Health dashboard, HealthVault does support 3rd party integrations. For example, you can configure a conduit between FitBit and HealthVault to allow your fitness activities and body composition to sync directly. But, while the list of 3rd party integrations for hardware, software, and services seems extensive, you can tell that it’s been a long, long time since anyone bothered to keep the list current. A huge overhaul is definitely needed.

One of the more interesting and promising integrations is FitnessSyncer.com, but that service also seems a bit outdated and its capability is sluggish. Using FitnessSyncer I was able to connect my Garmin Connect account (including stats from my Garmin Fenix 3 HR and Garmin Scale) to HealthVault and though excruciatingly slow, was eventually able to get my fitness activities and body composition to show in HealthVault.

The bottom line here is that Microsoft has a lot of work to do. Eliminating the distractions of consumer-focused hardware and services should definitely help it get back on track. HealthVault is the linchpin for what is developed next and this should be where we see the biggest gains. I’m looking forward to seeing some much needed changes and improvements, and I believe we’ll see those happen pretty quickly.