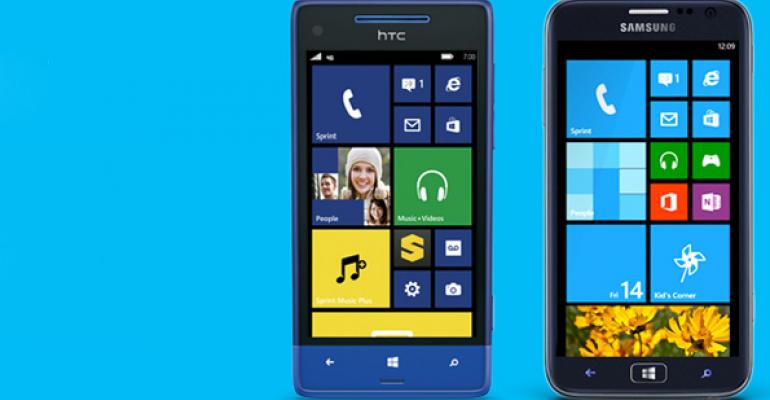 Both phones are designed to work with Sprint’s CDMA-based 4G LTE network, and both will be available for purchase with a two-year contract sometime this summer. Neither carries the cachet of a Nokia “hero” phone, but for those on Sprint who have been waiting anxiously for something new, this is still big news.

This one looks interesting because it appears to feature the HTC 8X’s innards with the HTC 8S’s exterior styling which, if you’ll recall from late 2012, I actually really preferred. (If not, check out Windows Phone 8: HTC Windows Phone 8X and 8S Preview.) But it’s not just looks: This is the first Windows Phone handset to feature two front-facing speakers which, when combined with the device’s Beats Audio sound processing, could provide serious sound output.

The specs are normal for Windows Phone: A dual-core 1.4 GHz processor, 1GB RAM, 8GB internal memory, microSD expansion with support for up to 64GB, 4.3-inch display, Wi-Fi, Bluetooth, and GPS. (I’m guessing the display is 800 x 480 since it’s not specified.) And it’s not clear how good the camera is.

The HTC 8XT will cost $99.99 with a new line or eligible upgrade, two-year service agreement and $50 mail-in rebate, Sprint says.

Just when you thought Samsung had given up on Windows Phone, here’s a new ATIV handset.

The ATIV S Neo sports a 1.4GHz dual-core processor, 1GB of RAM, 16GB of internal storage, microSD expansion, an 8 megapixel camera and a 4.8-inch HD display (again, not clear on the resolution). The phone also features ATIV Beam, which uses NFC for sharing photos, music, and videos with other Windows Phone 8 smartphones and some Android devices.

The ATIV S Neo will be priced at $149.99 with a new line or eligible upgrade, two-year service agreement and $50 mail-in rebate, Sprint says.