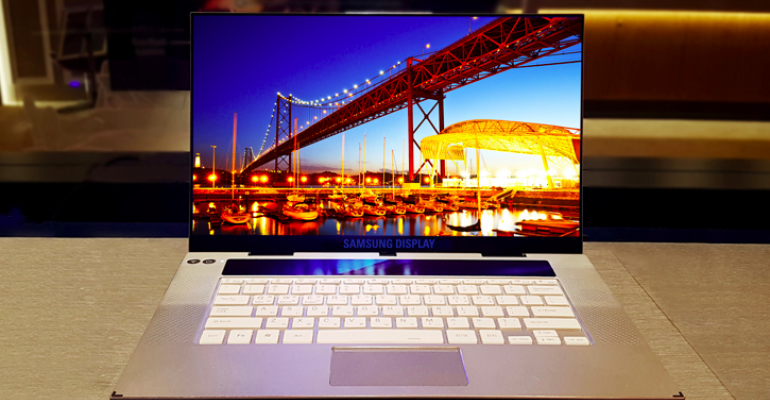 The 4K OLED monitors will be targeted toward users who buy high-end laptops for graphic design and video streaming.

Samsung is set to begin production of the first 15.6-inch, 4K OLED screens, which will be lighter and thinner than LCD screens while offering deeper blacks, better peak brightness and more screen real estate in the same space. The ultra-high-definition notebook displays will be targeted toward users who buy high-end laptops for graphic design and video streaming.

“The new display provides a spectrum of 3.4 million colors (double that of similarly sized LCD panels),” the company said in a statement. “[This] allows for truly lifelike images, with colors meeting the DCI (Digital Cinema Initiatives)-P3 standard, the specification best suited for video streaming. The 15.6-inch UHD panel is designed to keep the complete DCI-P3 color gamut fully intact while emitting significantly less blue wavelengths that can potentially be harmful to the eye, making images easier to view even after prolonged use.”

The 4K OLED monitors may also appeal to users who work in the field because of their clarity in outdoor light, the company said.

Ray Soneira, president of DisplayMate Technologies, said OLED displays can run from edge to edge without a bezel, in comparison to LCD screens. They can also be made into flexible and curved displays, opening the door to new laptop features in the future.

“Some users may like the appearance of a curved display, but that’s a preference marketing issue,” Soneira said. “However, there is a major technical advantage to a concave--rather than convex--curved screen because it can significantly reduce reflected ambient light, which then improves the contrast ratio and color saturation, and allows the display to run at a lower power, which then increases the battery running time for mobile devices.”

Samsung said the displays can produce blacks that are 200 times darker than those of LCDs and whites that are twice as bright.

“Our 15.6-inch UHD OLED panel provides the most suitable display solutions for carry-on IT devices with outstanding HDR enhancements, unparalleled color reproduction and much-improved outdoor visibility,” said Jae-nam Yun, head of marketing at Samsung Display, in a statement. “We have no doubt that our new OLED display will offer a much superior visual experience to notebook users worldwide.”

Soneira said OLED displays have sub-pixels that are powered individually, and they use less power because only the active sub-pixels draw power depending on the brightness required.

OLED displays offer better color accuracy than LCDs, Soneira said, because they have variations in their backlighting.

The new Samsung displays also are likely to impress users with the 700 pixels per inch they offer, Soneira said. Because of the “screen door effect,” seen in LCDs, where you can see the lines between pixels, LCDs are inefficient at displaying images at at high-pixel density.

Are Ruggedized Laptops More Rugged Than Your Business Needs?
Jan 03, 2019