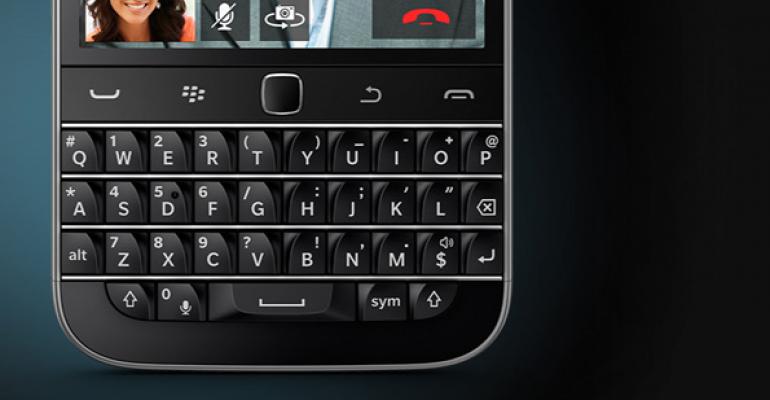 What do you get when you combine a sick eagle with a turkey?

Reuters is reporting that Samsung is discussing a $7.5 billion buyout of Blackberry, a tech-industry megamerger that would help the consumer electronics giant compete more effectively with Apple. Though the talks appear to be true, Blackberry threw some cold water on the news—and its own temporary stock hike—by claiming that the report is "groundless."

So clear, the report is true.

According to Reuters, it has viewed documents related to the purchased and has interviewed a source with direct knowledge of the talks. And the credible news organization says Samsung is willing to pay up to $15.49 a share for Blackberry, a premium of 60 percent over Blackberry's share trading price (before the news broke).

According to Blackberry, that's hogwash.

"Media reports of the acquisition are groundless," a Blackberry spokeswoman said. "Blackberry has not engaged in discussions with Samsung with respect to any possible offer to purchase BlackBerry."

News of the potential acquisition sent Blackberry's stock skyrocketing by 30 percent. But Blackberry's denial chopped about half that added value off immediately.

Before deciding which side is presenting an accurate view of things, consider the following. The Canadian newspaper Globe and Mail also reported this week that Samsung isn't Blackberry's only suitor. Blackberry has instead spurned "a handful" of takeover offers over recent months because of a growing understanding that the firm's value to shareholders has grown. And these offers—even Samsung's $7.5 billion offer—fall short of what Blackberry is really worth.

Without knowing a thing about what's really happening, my guess is that Samsung has indeed offered $7.5 billion to acquire Blackberry. And that sensing the growing interest, Blackberry feels like it can get even more.

Some will point out that the $7.5 billion price tag is very close to the $7.2 billion that Microsoft paid for Nokia's devices and services businesses and that, as such, these deals are somehow related. But they're not really comparable.

Here's why. With the Microsoft/Nokia deal, the Nokia mobile assets simply shifted to a new company, and it didn't make Microsoft a "bigger" mobile devices firm; it wasn't selling other handsets before. (Yes, I know. Surface. But Surface is a tiny business.) With a potential Samsung/BB tie-up, the world's biggest (but struggling) handset maker gets two important bumps: Blackberry's $1.43 billion patent portfolio and a real foot in the door with business customers.

These two factors are both very important for Samsung because it is facing strong competition in both the volume low-end of the market, with a growing hoard of fast-moving Chinese companies like Xiaomi, Huawei and others, and at the high-end with Apple.

I don't think Blackberry's handset business is worth squat—and never have, see RIP, RIM—but Apple is waltzing into the enterprise without any effort at all, and of course the release of the iPhone 6 handsets will see the firm get what I think is a non-temporary market share bump. It's time for Samsung to fight back. And picking up Blackberry may actually make sense. For both parties.