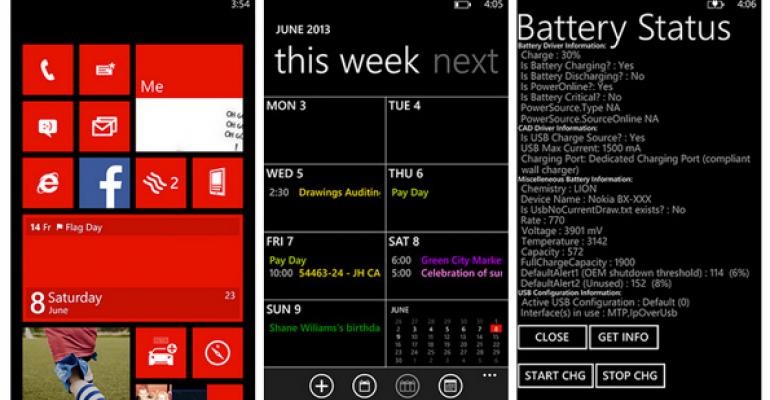 But is it real?

With Microsoft finally coming clean about its plans for the “Blue” wave of updates to Windows 8, Windows RT, and Windows Server 2012, one major product line has remained a mystery, and to date we still have no concrete idea what’s coming in Windows Phone 8.1 “Blue.” This past weekend, however, an apparent set of leaked screenshots of an earlier Windows Phone 8.1 “Blue” build gives us at least a peek of what to expect.

For Windows 8/RT, of course, “Blue” has been an open book: We started seeing leaked builds of this update months ago and in recent weeks Microsoft has turned its PR engine up to 11, communicating what it plans to deliver in a series of well-timed announcements and revelations. (More is coming, too, most obviously at Build later this month.) Windows Server “Blue”—now called Windows Server 2012 R2 never leaked, but Microsoft has done a good job of keeping reviewers in the loop, and the firm unleashed a massive information dump about this and other enterprise- and cloud-based products and services last week at TechEd.

But what about Windows Phone?

If you’ve been keeping up with Windows Phone since its February 2010 announcement, you may know that Microsoft has release a major Windows Phone release for three years in a row, at roughly the same time of the year: October 2010 (Windows Phone 7), 2011 (Windows Phone 7.5), and 2012 (Windows Phone 8). When you consider that two of these releases—Windows Phone 7 and Windows Phone 8—were in fact new architecturally, that’s a pretty damned impressive schedule (and one that runs contrary to all the griping about a lack of interim updates.)

That does not appear to be happening.

Indeed, everything we’ve heard has suggested that Windows Phone, paradoxically, was in fact moving to a lengthier product cycle. Originally, I heard that we could expect Windows Phone 8.1 by the end of 2013 at the very earliest, but that early 2014 was more likely. Now, I’m hearing that it could fall as far back as Q2 2014.

At one point, a source confided that Microsoft had moved away from its original yearly schedule at the request of Nokia, and that Windows Phone was realigned to match the needs of its biggest (by far) hardware partner. I’m not actually sure that’s what happened, but this information came independently from any slip in schedule, so it’s certainly plausible.

(I’ve also been told not to expect any Windows Phone 8.1 “Blue” information at Build. I find that somewhat hard to believe, but there are at least a few more GDRs, or general distribution releases, coming this year. Surely, Microsoft will address these updates at the show at least.)

But regardless of the timing, Windows Phone 8.1 “Blue” has remained a mystery this year so far. Part of the reason is that phone bits can’t leak as easily as software updates like Windows 8.1: The OS is delivered a firmware, often for specific phone models, that isn’t easily installed by individuals. So we’ve been waiting on an informational leak, similar to the mountain of information I received about Windows Phone 8 last January, several months before Microsoft publicly discussed the release in public.

But it wasn’t until this past weekend when a leaked set of screenshots, which I take to be the real thing based on my experience with earlier prerelease versions of Windows Phone over the past few years, made their way to Flickr. (Since removed, sorry.) These shots, I think, do reveal some of Microsoft’s plans for the next major update to Windows Phone.

Here’s what we can see.

In the suddenly long tradition of “Windows Phone would be great if only it had [insert feature here],” a notification center is the new darling. Android has had a notification center for years and even Apple’s lackluster iOS added one in late 2011. But Windows Phone relies instead on live tile for persistent notifications. These tile updates are certainly more dynamic and useful than what’s available on iOS and Android icons, but they can’t rely match the amount of information that can be relayed by a full-screen notification history list.

The version we see in the leaked shots is pretty basic looking and uses a misguided tiles-like UI. But you get the idea.

Answering one of my own key criticisms of Windows Phone, the multitasking UI is finally picking up the most obvious feature of all time: A Close App button (“X”) that you can use to manually shut down an app. Brilliant.

One of the weird problems with Windows Phone is that the All Apps list—seen by swiping horizontally from the Start screen—gets unwieldy when you add too many apps to the phone. So Microsoft added a quick navigation feature, which is nice, but still not granular enough for real-world use. In Windows Phone 8.1, Microsoft appears to be adding a sorting capability to All Apps, just as they are doing in Windows 8.1, so you can view this list in far more useful ways.

I really like the Windows Phone Calendar app but its available views are somewhat lackluster. It’s not totally clear from this shot what’s changing, but there are definitely more view options coming, including This Week and Next Week, and the views will all be available right from the app bar. Good.

There are other minor things in there—a Battery Sense app that could sit alongside Data Sense in helping you keep your phone working efficiently—but you get the gist. Assuming this stuff is real—always a tough call—I like what I see here. And of course I expect a lot more as well.