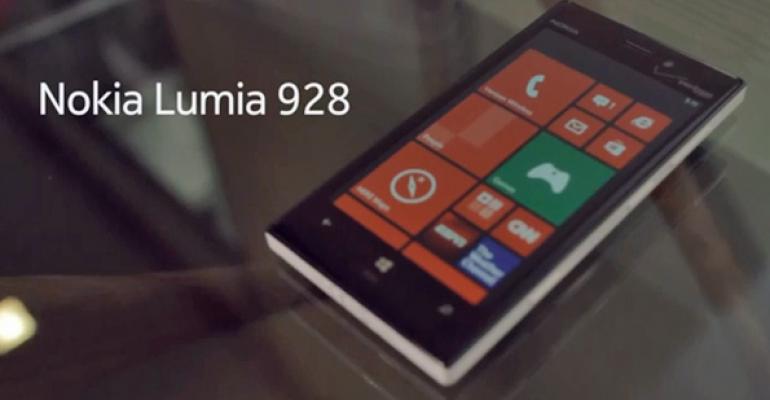 This month, Nokia issued its new Verizon Wireless flagship phone, the Lumia 928. As its name suggests, the 928 is a derivative of the well-received Lumia 920, which I’ve described as the best overall Windows Phone handset. But the 928 offers a handful of improvements that, yes, put this a notch or two about the 920.

Before proceeding, please read my Nokia Lumia 920 Review. Because these two devices are broadly almost identical, what I’d like to focus on here are the differences. Most seem minor, but some, I think, are important.

OK, first a quite executive summary for those not interested in reading my previous Lumia 920 review: The 920 is a huge and heavy device with a wonderful HD+ screen, a superb and almost industry-leading camera that is particularly well-suited to low-light photography, leading edge features like NFC and wireless charging, and stocked with a full complement of Nokia’s amazing mobile apps, especially the incomparable HERE location apps. It’s an excellent handset, and has been my primary phone since I received the review unit. I don’t want to give it up.

Or, I should say, I didn’t want to give up. A few weeks back, Nokia loaned me a Lumia 928 for review and … damn. This isn’t a revolutionary update by any stretch of the imagination, but the Lumia 928 brings forward everything I like about the 920 while fixing most—but not quite all—of the issues I raised about that device. Yes, it’s an evolutionary bump up from the 920. But it includes some welcome changes.

The basics, of course, are unchanged. The 928, like the 920, includes the same underlying hardware: A 1.5 GHz dual-core Snapdragon S4 processor, 1 GB of RAM, 32 GB of (non-expandable) internal storage, 802.11 a/b/g/n, and Bluetooth 3.0, a 4.5-inch 1280 x 768 display, an 8.7 megapixel PureView camera, integrated NFC and Qi-based wireless charging, the works. Battery life is roughly the same, and while these things are hard to measure in real life, it’s in the “almost all day” range.

And then there are some differences between the two devices.

First and most obviously, the 928 form factor is subtly different from that of the 920, though it’s not so subtle when you get them side-by-side. The 928 is both taller and less wide than the 920, noticeably so on the former and not-so-much on the latter. It’s a hair lighter than the 920, which sort-of answers the complaint about the dense nature of the 920, though to be fair the 928 is still accurately described as huge and heavy. (The actual stats: The 928 weighs 162 grams vs. 185 grams for the 920.)

Where the 920 is all curves, the 928 offers a more angular take on the Lumia unibody design. It’s built of the same bullet-proof polycarbonate material, which feels great to the touch, though the angular design of the 928 curiously makes it more slippery, like a bar of soap. I happen to think the 928 is the handsomer design, though the lack of Lumia 920 colors—it comes in just black or white—may disappoint some.

While the screens of the two devices offer the same resolution with the same physical size, the underlying display technology is different. The Lumia 928 offers an AMOLED display instead of the IPS display used on the 920. What that means in real world terms is that the 928 is notably crisper with jet black blacks and bright but not blurry-edged whites. But I found the 920’s display easier to read outside, where the 928 discolored somewhat, with my chosen crimson theme turning into a weird washed out light red.

Much has been made about the quality of Nokia’s Lumia cameras—indeed, I recently wrote up my own homage in The Nokia Advantage: Camera—and here the 928 really does shine. It’s identical, hardware-wise, to the 920, with the same 8.7 megapixel PureView quality. But there is one notable difference: The 928 has a XENON flash in lieu of the 920’s dual LEDs. This should have improved the quality of shots with the flash, but I found them to be notably yellow. That said, the 92x offers such good low-light photography, I just leave off the flash. And in that case, the photos were always very comparable. Which is to say great.

Nokia changed both the micro-USB and speaker locations on the 928, leaving the bottom of the device curiously devoid of ports. So now the micro-USB is on the top, which I don’t like, and the speaker is on the back and is bigger. That I do like because the sound is both crisper and louder.

That the 928 runs only on Verizon’s CDMA- and LTE-based network means that direct comparisons with the 920 are somewhat pointless: You’re going to get the phone you can get on the network you use. (And T-Mobile customers will soon be able to choose the interesting Lumia 925 as well, which has advantages of its own, including a potentially even better camera.) I’m not a huge fan of Verizon, and find AT&T’s network and, particularly, support of international plans, to be superior. But the 928 is arguably the better phone than the 920, albeit in a very close race.

For now at least, the Lumia 928 is the best Windows Phone handset you can get in the United States. Will that change when the Lumia 925 arrives? Perhaps. But the bigger changes won’t occur until later in the year when Nokia’s second-generation Windows Phone 8 devices arrive. The 928’s time atop the heap may be short indeed.