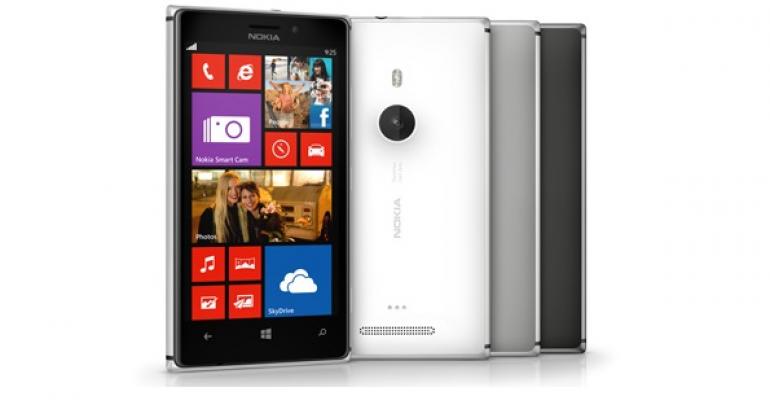 Not quite a hero phone?

Nokia on Tuesday announced the Lumia 925, its second major Lumia 920 derivative and the first Lumia to sport an aluminum rather than polycarbonate body. Available internationally and on T-Mobile in the US in June, the Lumia 925 isn’t the PureView monster we were hoping for, but is rather another evolutionary step for Windows Phone 8 handsets.

Indeed, today’s Lumia event, which promised a look at the future of Nokia’s Windows Phone 8 handset lineup, was a bit of a letdown: The Lumia 925 was the only phone the firm introduced—it also revealed the related Verizon-based Lumia 928 in recent days for some reason—though Nokia did unveil a Smart Camera feature of the 925 that will be heading out to existing Windows Phone 8-based Lumias this year. What we didn’t get was a look ahead to second generation Windows Phone 8 Lumias that will ship in the second half of 2013. Surprising and disappointing.

But there are changes both good and bad. On the latter end, the Lumia 925 inexplicably comes with just 16 GB of internal storage—compared to 32 GB on the others—and because there’s no micro-SD card slot, that’s unexpandable. That seems like a poor decision to me, though the addition of a 32 GB model would cure that issue nicely.

On the good news front, the new aluminum body satisfies the very real complaints about the heft and density of the Lumia 920, which is based on a unibody polycarbonate design. The 925 is dramatically lighter than the 920 and a bit thinner. I’ve not used one yet—I was supposed to preview this device a few weeks back but there was a scheduling mishap—but I’m told it also feels great in the hand and could possibly result in more similarly designed Lumias in the future.

(When this phone was teased, there was a clear camera bump on the back, leading to speculation that it would include a higher resolution PureView camera than the other 92x’s. This is not the case, and it appears that the bump was necessitated solely because the 925 is otherwise just thinner than the 920.)

Aside from the thinner and lighter aluminum body, the most interesting aspect of the Lumia 925 is the new Smart Camera functionality. According to Nokia, this new mode lets the Lumia camera snap 10 pictures in rapid succession so you can pick the best one. Two things differentiate this feature from similar functionality on other smart phones. First, each shot is 5 megapixels, far higher resolution than is typically the case for an action mode-type feature. And second, Nokia applies some complex post-processing to each image so that they're as high quality as possible.

We’ll see how this works in the real world. Literally, since Smart Camera is coming to other Lumias soon as well.

The Lumia 925 will cost 469 Euros across the pond when it ships in June, so expect U.S. pricing to be roughly the same in dollars, perhaps $499 unsubsidized.

Put simply, the Lumia 925 looks interesting because of its unique new aluminum body, but once you get over that it’s pretty clear this is just yet another first generation Windows Phone 8-based Lumia, and possibly the last of that line. And with just 16 GB of non-expandable storage, we can’t really describe this device as a “hero” phone, which I also find puzzling.