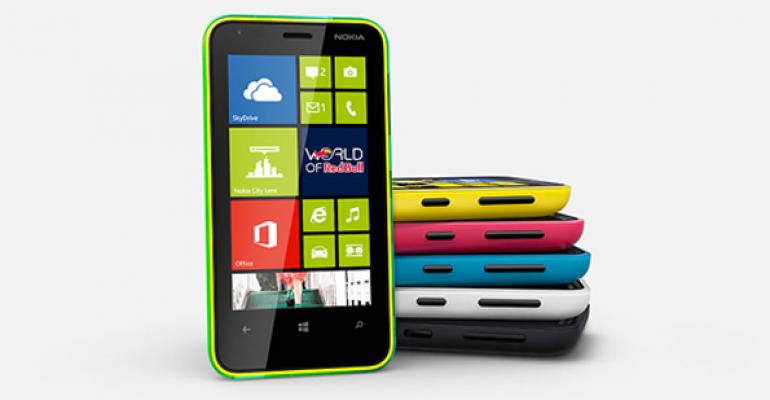 Surprisingly cute and tiny, the Lumia 620 is only available outside of North America

While Windows Phone fans in the US won’t be able to pick up a Lumia 620 through the normal channels, Nokia sells these cute little entry-level handsets in other markets. I purchased one recently for testing purposes, and while I won’t be formally reviewing it, I figured readers would be interested in some photos and first impressions.

You can find out more about the Lumia 620 from the Nokia web site. But it’s an entry-level device with a tiny 3.8-inch 800 x 480 screen, 1 GHz Snapdragon S4 processor, 512 MB of RAM, 8 GB of internal storage (with micro-SD expansion), and 5 megapixel camera. On the plus side, it is endearingly cute, and comes in multiple colors with replaceable “dual-shot” back shells that provide a two-tone burst of color as evidence by the promo shot above.

I just got the white version, however, since I won’t actually be using it myself, and got it (from Expansys, where it was just $290) for testing purposes. This is the cheapest Windows Phone 8 handset on the market.

Anyway, it also features a removable battery, which I prefer. And I have to say, the removable cover—as with the Lumia 820 I also found surprisingly solid—is preferable to Nokia’s huge and unexpandable Lumia 920. Nokia should drop the unibody pretense and deliver this kind of device. They’re vastly preferable.

What it doesn’t appear to offer is any 4G/LTE capabilities. I haven’t tested that yet, and probably won’t, but since it’s not formally supported in North America, the point may be moot. But if you live outside this region and prefer something on the tiny side—perhaps for a child, for which this phone would be semi-ideal—the Nokia Lumia 620 is a cute little option.

Here are some shots.