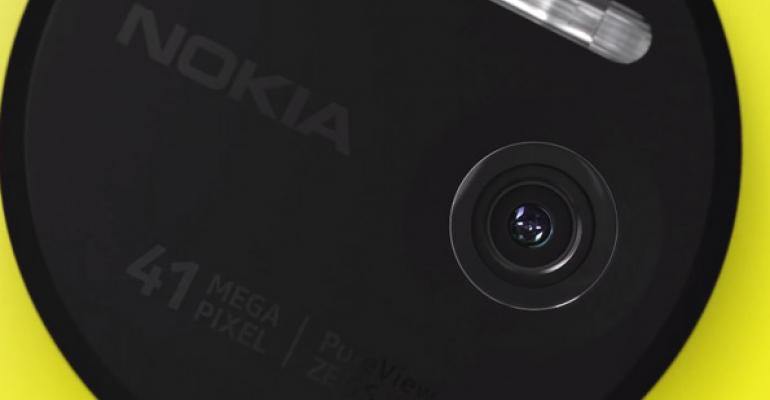 Hands-down the most amazing smart phone camera ever created

For once, the hype is real: Nokia’s stunning new Lumia 1020 delivers digital SLR-quality photos in a smart phone that is the same size as, but lighter than, the previous flagship Lumia 920. This unprecedented achievement resets our understanding of what’s possible in such a form factor, and renders every other smart phone camera immediately obsolete.

Ladies and gentlemen, meet the single greatest smart phone ever created: The Lumia 1020.

Let me get the obvious stuff out of the way. From a smart phone perspective, the Lumia 1020 is basically the Lumia 920 with a slightly more updated version of the Windows Phone 8 OS—it includes GDR2 and a Nokia update called “Amber,” which I’ll discuss in a future update. Looked at from the front, most would have a hard time telling the two devices apart.

But pick up the Lumia 1020—and I’ve been using this device extensively for the past week—and two changes immediately become obvious. First, the 1020 is—amazingly, given its innards—lighter than the 920. It’s so light, in fact, that it feels like an empty engineering sample. It shouldn’t be possible for a smart phone like this to feel this light. It’s the feather to the 920’s brick.

Second, a surprisingly small camera bump juts out from the back of the 1020, and you can feel that in your hand when you pick it up. You can see from a profile view how little it sticks out. So to the haters out there who have inaccurately described this thing as a great camera with a smart phone attached to it, sorry. You couldn’t be more wrong.

OK, so the Lumia 1020 has the latest version of the very best smart phone OS. It has the proven and desirable Lumia form factor in its bulletproof polycarbonate with just a small camera bump. Got it? Good. Let’s get to the fun stuff.

The camera in the Lumia 1020 frickin’ rocks.

It all starts with the PureView camera hardware, obviously. It features a 41 megapixel sensor with the requisite 6-lens Carl Zeiss optics, and a wide f/2.2 aperture and a Xenon flash that, like other Lumias, I only use for focus. (Nokia offers a nice focus flash feature which works really well.)

The camera is amazing, duh. But because it’s not attached to an optical zoom, you’re going to need to make some adjustments. That is, while you may be used to zooming in while photographing a subject with a dedicated camera, smart phone users know that doing so with a phone camera is an exercise in frustration. That’s because the lack of optical zoom combined with hand shakiness—which is amplified when you zoom—makes the resulting pictures blurry and unusable.

The 1020 compensates for the hand shakiness somewhat by using a unique combination of tiny ball bearings and an electronic motor. But it can’t overcome the lack of an optical zoom, so many manually zoomed images are unacceptable, as they are with other smart phone cameras. But again, you just have to adjust.

Last weekend, for example, I went on a lengthy walk around Dedham and in doing so came across a bumblebee on a plant leaf. With a dedicated camera I would simply zoom in on the creature to get a close-up shot. But I had the 1020, so I just took a normal picture. The result is this.

Looks like your typical smart phone shot, eh? Well, it’s not. Because this 16:9 image uses 33 megapixels of data (7712 x 4352), you can zoom in (on-camera or after downloading to your PC) and see an exquisite amount of detail. You see, the bee actually looks like this.

And this isn’t a particularly good shot, it’s just a representative shot.

Taking pictures with the Lumia 1020 requires one other adjustment, by the way, assuming you’re used to Windows Phone. Using the bundled Camera app with other Windows Phone handsets, you can simply tap the screen at the point you wish to focus and the app will both focus and capture the shot. With the Lumia 1020 and its new Pro Camera app, you do tap the screen to focus. But then you tap an onscreen button to actually take the shot. This is taking a bit of getting used to. (And more than once, I’ve assumed I’ve taken a shot when I haven’t because I’m still used to the old way of doing things.)

That Pro Camera app is amazing on a number of levels. That two-tap manual focus routine I just described often results in pictures with an amazing depth of field that is almost impossible to achieve on most smart phones. Consider these two examples, both from last weekend’s walk.

But the real power of Pro Camera is really seen through its onscreen controls for flash, white balance, focus, ISO, shutter speed and exposure value (EV), which are found at the strip at the top of the screen. By default, each is set to Auto. But you can adjust each individually by tapping the appropriate icon and then using a half-circle slider to change the value.

This works amazingly well and you can see how the change you’re making will impact the photo you’re about to take, in real time. This means that these controls can actually teach you to become a better photographer, while offering those who already know what they’re doing better control over their photos. Compare this shot to the previous one to see how the live preview really makes a difference.

Furthermore, the app warns you when a value you’re selecting is inappropriate: The selector you’re sliding will change to red.

Best of all, you can actually engage the slider controls for white balance, focus, ISO, shutter speed and EV all at once, and play with each setting in turn. To get to this view, simply swipe right to left on the onscreen camera button.

Videos are likewise amazing. At the launch event a few weeks back, Nokia showed off a concert clip in which it was obvious that the sound in real life was overly loud and hard to listen to, but when recorded with the 1020, the resulting audio was as crisp and clear as the HD video. Coincidentally, I attended a concert last week and made a single short video clip. As you can see for yourself, the result is a steady picture—I was just holding the device normally, not propping it up in any way—and the audio is FAR better than it was in person.

Pro Camera provides another amazing service. For each photo you take, it actually saves two files to the device. One is the original image at full resolution (so 33 megapixels for 16:9 shots) and one is an oversampled 5 megapixel version that is suitable for sharing on Facebook and other services. But you can at any time “reframe” the original photo using a simple editor that’s built into Pro Camera. Reframing is where you zoom in—as I might have done for that bee photo above—and then re-save the photo using this new framing. Underneath, the system retains all of the data in the original photo and you can at any time go back and reframe it again, bringing back “lost” pixels and more picture. You can also reframe to different aspect ratios.

This reframing capability is tied to that first adjustment I mentioned previously. I didn’t need to zoom in on the bee before taking the shot because I knew I could simply reframe that photo later, and as long as I had focused on the bee, the resulting zoomed-in reframe would look amazing. And it does.

What I’d like to see is a simpler way to “Save As.” As it is now, when you reframe, you overwrite the previous shared version of the file. Obviously, the original is never overwritten.

Check out my gallery of photos taken with the Nokia Lumia 1020:

Beyond Pro Camera, there are other niceties, of course, including Nokia camera and photo apps that you can get on other Lumias, but are all the more impressive with the high quality shots you can take with the 1020. For example, the Smart Camera app takes a quick sequence of shots and then lets you choose between a number of amazing effects, including choosing the best single shot, a cool photo that combines action sequences, a motion emphasis shot in which non-motion parts are blurred so you can focus on what’s happening, and more. Creative Studio lets you apply amazing effects to your photos, like blur and focus shift. And Cinemagraph lets you animate just a discrete area of a photo, kind of like an animated GIF, while the rest of the image remains still.

I know you have lots of questions. Battery life, for example, is no worse than it has been with my Lumia 920, though I’ll need to torture test it a bit to see how using this as an all-day camera changes things. So far so good on that note. But I’ll have a lot more to say about this device over the next month, too: I’ll be taking it to Europe for three weeks and will be writing a series of articles describing my experiences. And I’ll be reviewing the various Lumia 1020 add-ons, like the camera grip and wireless charging plate.

But know this: The Lumia 1020 is my new daily-use smart phone. The Lumia 1020 is the best thing that’s ever happened to smart phone photography and it’s the single best Windows Phone handset on the market. It is one of the most impressive electronic devices I’ve ever used and it has already profoundly changed the way I approach recording life’s most interesting moments. When you consider how important photography really is, the impact of the Lumia 1020 becomes obvious.

Highly recommended. This is the real deal, folks.