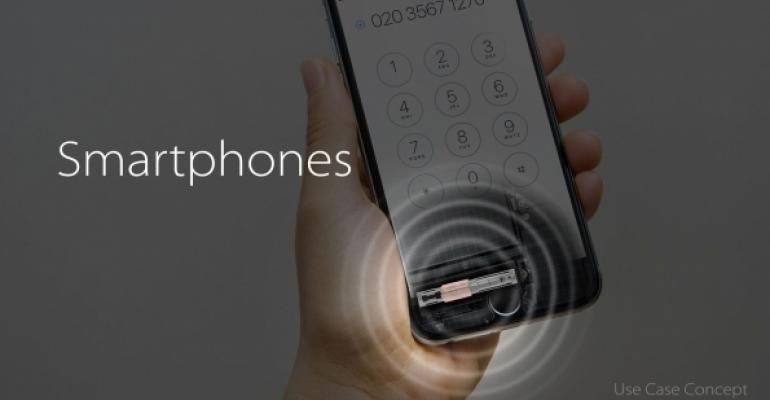 If Silicon Valley start-up Nanoport has its way, your future smartphone and many other devices will be operated using built-in and customizable haptic feedback anywhere on its display screen or sides, making physical buttons unnecessary.

Nanoport's haptic technology, which company CEO and founder Tim Szeto says is being shopped around to smartphone component makers, will give phone designers and application developers tools that will let them add a new generation of haptic feedback capabilities anywhere on a device's display, including in multiple locations for different apps.

The key to Nanoport's haptic strategy is the TacHammer, a small component containing at electro-magnetic coil which can be built into smartphones and other devices to broaden their haptic features. Haptic capabilities from competitors today typically work using bursts of controlled vibrations, said Szeto, while the TacHammer adds the ability for developers to include haptics which also provide individual pulses, taps, clicks and sharp jolts. The development and availability of the TacHammer technology was announced by Nanoport on Sept. 7.

"This will allow anyone who builds an app to build custom haptics into a device," Szeto told IT Pro. The TacHammer would replace the existing vibration motors which are used in smartphones, taking the place of existing parts and allowing app developers to expand the capabilities and features of their mobile apps, he said. The TacHammer uses a spring-less design which reduces actuation resistance and allows it to provide greater force with up to five times less power than existing designs.

And bringing improved haptics to smartphones is just the start, said Szeto. Also planned are moves to bring the company's haptic designs to virtual reality devices, to other consumer products such as televisions and gaming boxes, and to automobiles for steering feedback and touch-screen displays and console buttons.

The TacHammer is described as a three-mode tactile feedback actuator, according to the company. Using the technology, Nanoport hopes that removing physical buttons from a wide range of devices will instead give them more intense and varied touch feedback for users.

"Software developers can now use haptics to make their software UI feel like it has physical buttons," Szeto said. "Maybe one day we won't need any real mechanical buttons at all."

That means that users of the future could interact with a smartphone which has no physical buttons and which could be operated by squeezing its sides, while the handset reacts by emitting taps, pulses and vibrations to communicate its functions. At the same time, users would "feel" thunder, gunshots or even the beating of a heart while playing a game or using an app, according to Nanoport.

The company will be displaying and demonstrating its technology at the Mobile World Congress Americas conference in San Francisco from Sept. 12-14 and anticipates that it will be included as a feature for phones by a mass manufacturer later this year, said Szeto.

Szeto, who has been involved with other start-ups including Nano Magnetics, is also the chairman of the International Consumer Magnets Association, an industry group.