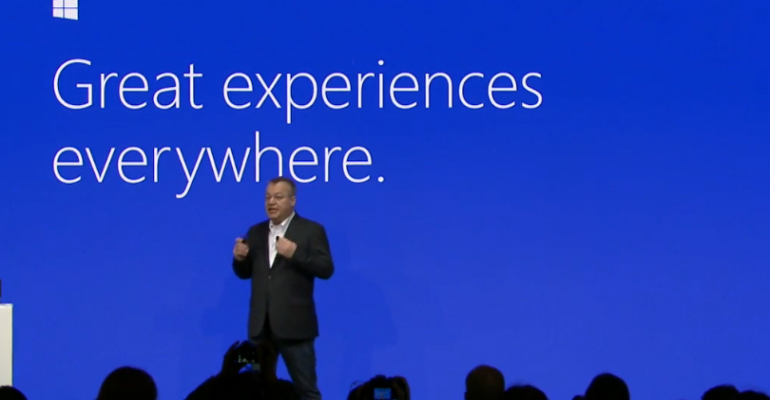 Microsoft held their annual opening press conference for Mobile World Congress 2015 in Barcelona today but overall most watchers will be disappointed with the lack of substantial news.

The event kicked off with Stephen Elop, Microsoft’s Executive VP for the Devices and Services unit, who trotted out the familiar theme of One Microsoft and One Windows experience that we have been hearing a lot of lately.

It is of course right in line with Microsoft's new focus as an apps and services company and we have certainly seen that in the way they are making all of their services available cross platform.

He mentioned very familiar phrases such as:

He did reveal that the Windows Insider program has now grown to over 2.8 million members and that more than 900,000 pieces of feedback have been submitted to Microsoft relating to Windows 10.

Next he told everyone about a new collaboration between Microsoft and AT&T called the AT&T Mobile Office Suite that brings centralized management of your Enterprise mobile connectivity. This new cloud based integrated office includes:

Then the official reveal of the Microsoft Lumia 640 happened with a very deliberate comment from Stephen that the phone was blue and not gold or white. This was an obvious nod towards the dress incident last week on the Internet that occupied everyone's attention for a few days.

Both devices will be available in single and dual SIM LTE and 3G versions plus the 640 XL will have a single SIM 3G variant.

Pricing is estimated as follows:

Microsoft News Center - Microsoft Lumia 640 and Lumia 640 XL: keeping you prepared for anything

Stephen did state that Microsoft’s plans include upgrading all Lumia phones that run Windows Phone 8.1 to Windows 10 but there will be variations in the available features depending on the hardware. He also confirmed that new hardware in the flagship category would be announced later this year.

Frankly, new high end devices will not come soon enough but it makes sense to have those be brand new Windows 10 devices instead of Windows Phone 8.1 handsets that can be upgraded to Windows 10. Otherwise users will view the device as not being true Windows 10 flagship handsets.

The next item on the agenda was a Windows Phone 10 demo by Neil Boradley including the first look at the mobile version of Project Spartan the new browser in Windows 10. The demo showed off Reading Mode that gives a distraction free experience much like that of Modern IE on Windows 8.1 or IE on Windows Phone 8.1.  I did notice that all the browser controls are at the top of the screen which might make them hard to access with one hand.

Cortana was then demoed and shown how she can sync information across your various Windows devices – nothing new in this area as we have seen these things before.  The universal Maps app was also shown off to emphasize the ability to sync your data and experience across devices.  The mobility of the experience is a big talking point for Microsoft these days.

Next up was an Office demo from Julia White who apparently had to compete against the very loud music from Sony’s press conference next door.  She did reveal a new universal mobile keyboard from Microsoft Hardware that is foldable, uses Bluetooth and can connect to all of your devices including Windows, iOS and Android.  This is a nice confirmation that Windows 10 on phones will support keyboards unlike Windows Phone 8.1 and its predecessors.

The demo included things we had seen before during the January consumer event for Windows 10 including the cross platform experience with the universal apps.

She also gave a brief demo of the new Surface Hub.

Stephen returned to the stage and showed the Hololens video, most of which we have already seen back in January, and then closed things out by letting every know that a steady stream of announcements and reveals will continue throughout the year leading up to the release of Windows 10.

Just 40 minutes and it was over. In case you blinked and missed anything or maybe you did not venture out of ned early in the morning to watch the event live you can see the On Demand version of the Microsoft MWC 2015 Press Conference for yourself.

So what did you think? Are you excited about anything that came out of the press conference?