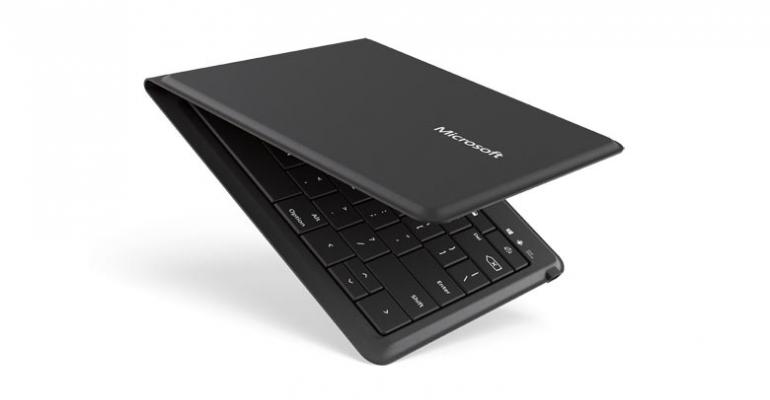 Although there were not any huge surprises during Microsoft’s MWC 2015 press conference there was a confirmation of at least one rumored item when Julia White showed off a new portable keyboard on stage.

A visit to the Universal Foldable Keyboard product page and a look over the system requirements list confirms that there will be a Windows Phone 8.1 Update 2 at some point in the near future. I suspect it will be out before July since this keyboard becomes available that month via retail channels.

With that system requirement it means keyboard support is coming to Windows Phone 8.1 and subsequently Windows 10 on phones which we have seen early indications of anyway.

The bonus here is getting that support for Windows Phone 8.1.

I don't know about you but as I looked over the images of this keyboard it sure reminded me of the Surface Type cover.

The build and keys look a lot like those keyboards and I would not be surprised if there was some technology cross over between the devices. I have asked Microsoft about this and will update the article when I hear back from them with any confirmation.

Update: According to a Microsoft spokesperson this Universal Foldable Keyboard was designed and built by the same team which is responsible for Microsoft Surface and PC accessories.  That means these similarities might not be a coincidence afterall.

This keyboard will be compatible with Android (4.3 to 5.0), iOS (7 to 8.1), Windows 8/8.1 and the previously mentioned Windows Phone 8.1 Update 2. The Bluetooth on those devices must be 4.0 enabled and of course the device itself must support Human Interface Device (HID) keyboards.

Last year Microsoft released a Universal Mobile Keyboard that was rigid however, it had very similar universal abilities to connect to Android, iOS and Windows devices but not Windows Phone.

That keyboard also was limited to connecting to only one device at a time but that limitation has been overcome in the new Universal Foldable Keyboard.

According to the product overview page the transition between devices is a one button push:

You can simultaneously pair it with virtually any two mobile devices—an iPad, iPhone, Android devices, Windows tablets, and Windows Phone—and then instantly switch between them with a single touch.

Maybe Microsoft should change their name to Universal - wait - that might already be taken.