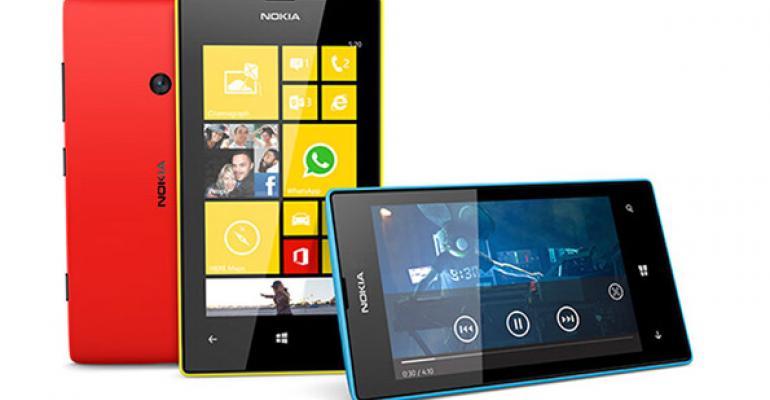 New Lumias are coming soon, but no sign of a tablet

As is so often the case, a pending industry event is semi-ruined by leaks, in this case shots and information about several new Nokia Lumia handsets that will be formally launched at this coming week’s Mobile World Congress.

With deference to Nokia, I’ll save the deep comparisons between these devices and the firm’s existing Windows Phone 8 handsets—the Lumia 920, 820/822/810 in the U.S., plus the Lumia 620 in other parts of the world—for the official announcement. In the meantime, here are some shots and quick notes.

If you’re familiar with Nokia’s lineup, you know that one downside to its current strategy is that its flagship phone starts out as a carrier exclusive in most countries, leading to disappointed fans stuck on other carriers. And so it is with the Lumia 920, Nokia’s current flagship, which, in the U.S., is available only on AT&T Wireless. But a variant of the 920, codenamed “Laser,” is apparently on its way to Verizon Wireless now as well. Presumably it will be identical, or nearly so, to the AT&T version.

This Windows Phone 8-based successor to the Lumia 710 is expected to be a mid-level smart phone.

This Windows Phone 8-based successor to the Lumia 510 is expected to be a mid-level or low-end smart phone.

I’m wondering whether Nokia isn’t overdoing it a bit with the models, but as others have pointed out, it’s a similar strategy to that used by car makers, and it’s not huge a stretch to claim that its expanded lineup of Windows Phone 8 handsets—the Lumia 920, 820/822/810, 720, 620, and 520—mirrors the BMW lineup somewhat.

Obviously, there’s a lot of interest in a Nokia tablet as well. But I’ve not heard anything about that yet.