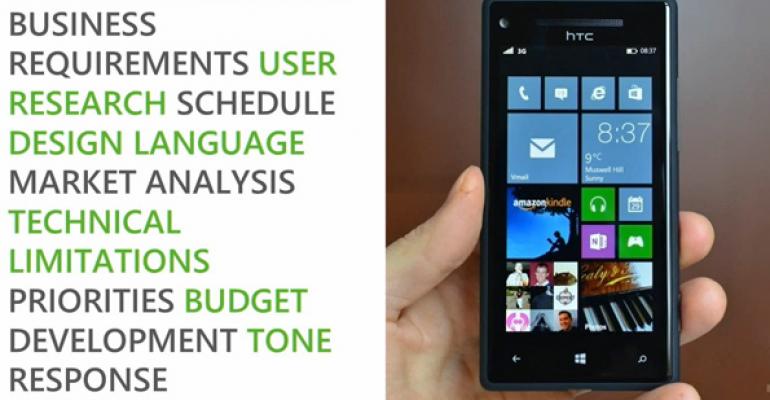 Each video stars Jared Potter, the principle designer at Sixth Ave Studios, a Microsoft partner. (Jared was previously the Windows Phone Design Integration Lead at Microsoft.) And if you’re interested in the philosophy and practical application of the Windows Design Language, previously called Metro, this is a fantastic place to start.

Windows Phone Design Bootcamp 101. “Windows Phone Design 101 covers the philosophy, inspiration and visuals that are Windows Phone Design Language. Starting with the basic terminology of design, this boot camp will take you from its early origins to the Design Principles each screen in Windows Phone was measured against. From there, we will show you the design process that guided its creation. Lastly, we will discuss the larger Microsoft Design ecosystem including Windows 8.”

Session 1: What is Design

Windows Phone Design Bootcamp 201. “In Windows Phone Design 201 focuses on the skills necessary to implement "pixel-perfect" Windows Phone UI. 201 will cover the "system" including basics of the phones navigation model, interaction with the shell and an overview of gesture system. Next it will cover "composition", which is about how to clearly define when it is appropriate to use a page template and when to use a particular animation or page transition or how to harness screen orientation. Lastly, we will cover, controls and APIs available for creating your own experiences and give tips on how to do simple prototyping.”