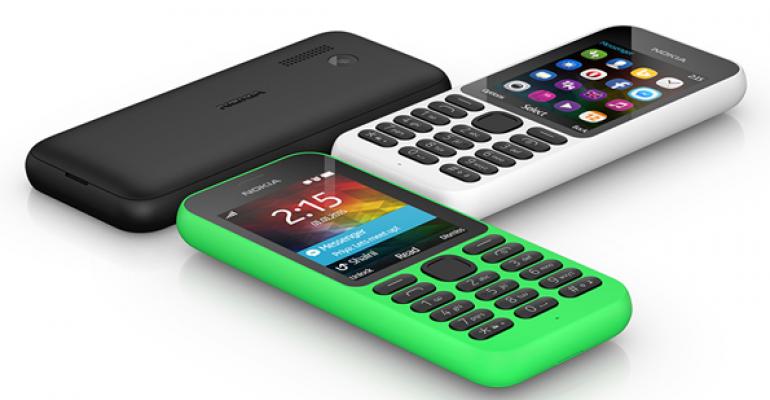 Microsoft's Cheapest Phone Yet, the Nokia 215

This is how low they can go

Just in case it wasn't obvious that Microsoft's mobile device strategy is to shoot for the lowest-end parts of the market, the software giant this morning announced its cheapest ever handset, the Nokia 215. As the name suggests, this device isn't based on Windows Phone and is instead a so-called dumb phone aimed at emerging markets. But it will cost just $29 and includes Internet access, media playback capabilities, a camera, and storage expansion.

Microsoft summarizes the benefits of the Nokia 215 in this handy infographic.

The firm is billing the Nokia 215 as its most affordable Internet-ready entry-level phone yet, and it targets both first-time mobile phone buyers and those looking for a cheap secondary phone. It features a familiar candy bar design and comes in bright, Lumia-like colors such as bright green, black and white.

The device includes Internet apps like Facebook and Facebook Messenger, Twitter, Opera Mini (web browser), Bing Search, MSN Weather and more. Plus, there is a built-in MP3 player, FM radio, and a "built-in torchlight"; as Microsoft explains, "for those who have no access to electricity—in 2014, that's still almost 20 percent of the world's population—the torch is a necessity!" So not quite the same concerns as we may have here in the States.

The Nokia 215 comes in both single-SIM and dual-SIM versions, offers a stand-by time of up to 29 days, and up to 20 hours of talk time. (Music playback lasts up to 50 hours.) There is Bluetooth 3.0 connectivity for headsets, headphones and speakers, and it supports SLAM technology for device-to-device file sharing.

Microsoft says that the Nokia 215 and Nokia 215 Dual-SIM will be available in select markets, rolling out first in the Middle East, Africa, Asia, and Europe in the first quarter of 2015.

Here's one of those typical Microsoft/Nokia-style intro videos for the device.