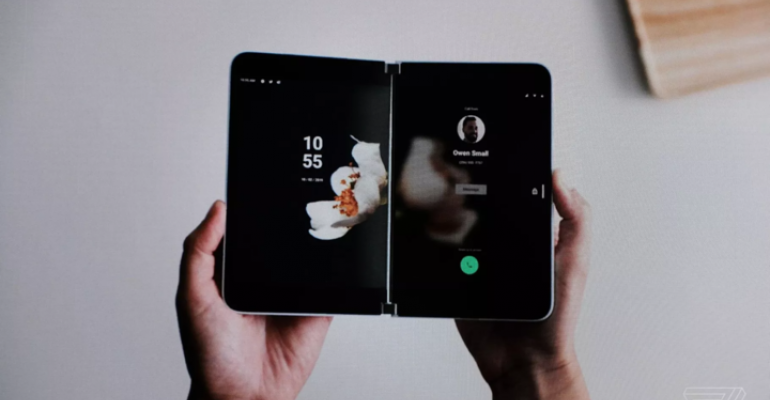 Microsoft unveiled a dual-screen, foldable phone that will run on Google’s Android operating system; the company also introduced completely redesigned version of its Surface Pro hybrid tablet and laptop that's thinner, lighter and faster and runs on a customized processor.

(Bloomberg) -- Microsoft Corp. unveiled a dual-screen, foldable phone that will run on Google’s Android operating system, jumping back into a market it exited years ago.

The phone, called the Surface Duo, has dual 5.6-inch screens and will ship in time for the 2020 holiday season.

Microsoft also announced  a new Surface Neo laptop with a 360-degree hinge and two 9-inch screens so it can open like a book or like a laptop. The device has a removable, flippable keyboard, which magnetically seals to the back of the device, along with a pen. It will run a new version of Windows 10 designed for dual screens called Windows 10X.

At the company’s annual fall event in New York Wednesday., Microsoft introduced completely redesigned version of its Surface Pro hybrid tablet and laptop that's thinner, lighter and faster and runs on a customized processor with Microsoft and Qualcomm Inc. technology.

Microsoft relies on its Surface devices to boost sales as well as show off its software and attract customers to its family of products. Many of the devices are well reviewed, though Microsoft lags Apple and other hardware vendors in popularity. The Redmond, Washington-based company held a 3.6% share of the worldwide tablet market in the second quarter of this year, making Microsoft the No. 6 vendor with shipments of nearly 1.2 million units, according to IDC. That represents growth of 48% compared with a year earlier. Apple by comparison was No. 1 in the market with a 38% share.

The company also unveiled a new laptop and an update to the existing Surface Pro device.

The new Surface Laptop 3 will have an aluminum exterior finish, “instant on” and a bigger trackpad. The device will be available with a 15-inch screen and fast charging. Panay said the product is three times more powerful than Apple Inc.’s Macbook Air. The devices can be pre-ordered today and will be available Oct. 22 at $999 for the 13-inch and $1,199 for the 15-inch.

The Surface Pro 7 comes out the same day and starts at $749.

Microsoft’s device revenue topped $6 billion in the year that ended June 30, including Surface units and PC accessories, according to its annual filing. The company uses the devices to attract corporate users to its hardware and programs, while Apple dominates the consumer part of the market, according to Daniel Ives, an analyst at Wedbush Securities. Still, he noted, some investors continue to question the wisdom of the hardware investments, especially after early failures led to a write down in 2013, and a sales shortfall in 2017.

“Surface represents the tip of the spear of the broader Microsoft ecosystem as Microsoft still needs a horse in the race on next generation consumer hardware and devices,” Ives said. “While some investors continue to question this investment as good money going after bad endeavors on Surface, we strongly disagree as this remains a mind and market share strategic gamble.”

Why Samsung Had to Delay the Galaxy Foldable Phone
Apr 22, 2019