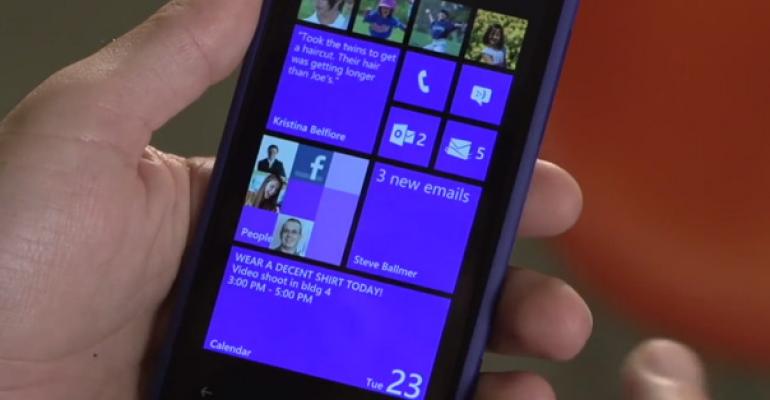 Windows Phone 8 makes some big gains, but we won't ever see the numbers that really matter

Not sure why Microsoft isn’t shouting this one to the rooftops, but there are now over 150,000 apps in the Windows Store.

How do we know this? In a curiously worded blog post, Microsoft’s Todd Brix hints at the new figure.

“Over the last year we’ve certified and published over 75,000 new apps and games (more than doubling the catalog size),” Brix writes in a post to the Windows Phone Developer Blog. Take a number over 75,000, double it, and you get over 150,000 apps.

54. The average number of apps that each user downloads to their Windows Phone handset. (That seems crazy high to me.)

85. The percentage ofWindows Phone 8 who would choose Live Apps over those without Live capabilities. (Live apps surface info from the app on the tile.)

191. The number of markets in which users can get apps and games for Windows Phone 8.

95. The number of markets in which users can get apps and games for Windows Phone 7.8, a 5x improvement from the start of 2012.

75. The percentage of Windows Phone users who prefer carrier billing for on-device purchases.

40. The percentage increase in developer revenue month over month since the Windows Phone 8 SDK release.

Numbers are interesting, but of course the real numbers we all want but will never get from Microsoft include actual Windows Phone license sales and real world market share for 2012. Still, there’s little doubt that things are on the upswing since the release of Windows Phone 8. The only question is whether it’s enough.

But then, I wrote about that topic a few weeks back, of course.