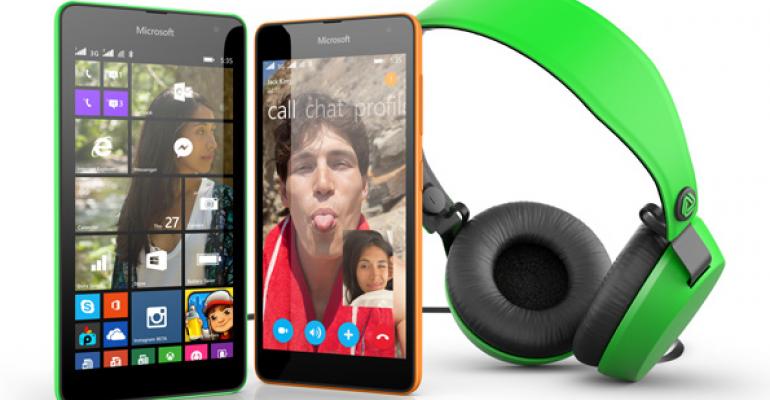 Nice, and affordable too

When Microsoft first announced the Lumia 535, I wasn't impressed: The firm was already flooding the market with low-end smart phones and I just didn't see the need for yet another one. But unlike the embarrassingly bad Lumia 530, which should be discontinued immediately, the Lumia 535 is clearly something special, and something that can sit confidently next to the Lumia 630/635 and Lumia 730/735 in Microsoft's lineup.

You need to devote a lot of time to fully understand Microsoft's Lumia line. Fortunately, that's my job, so I'll do it for you. Indeed, right before the firm announced the Lumia 535, I published Understanding Nokia's 2014 Lumia Lineup: Pricing, and that's not a bad place to start, though a subsequent article about the core specs in each—not yet published, sorry—would help as well.

So here's the short version.

At the very low-end of the market, Microsoft offers something called the Nokia Lumia 530. I've not written a review of this device, and won't because it's so terrible, but you can get the gist of the issue from my Nokia Lumia 530 First Impressions article. The device features pedestrian specs, as you'd expect from a phone that retails for well under $100 in the United States—but two, in particular, are fatal: Just 4 GB of internal storage, which is unacceptable, and a terrible, terrible screen.

Previous to the Lumia 535, the next step up was the Lumia 630/635. I own the Lumia 635, and it is a wonderful, wonderful low-end smart phone as evidenced by my Nokia Lumia 635 Review and earlier Nokia Lumia 635 First Impressions and Photos. I love the thing so much I've upgraded the storage (via microSD) and have purchased a green case, and I use it as a media player. Like the 530, the Lumia 635 retails for well under $100—you could get it for just $40 over Black Friday weekend, a steal—but unlike the 530, it has a (barely) acceptable amount of internal storage (8 GB) and a great screen. These two devices are night and day.

(You can get the Lumia 635 for $70 on Amazon right now. That is still an excellent price.)

But now we have the Lumia 535. What the frick is the point of that?

I will admit that I didn't get it at first. In my Microsoft Lumia 535 Preview, I wrote that this device appeared to be "nothing special," for example. But after evaluating what the company was trying to accomplish with this device, I sort of see the point. In writing Making the Market with the Lumia 535, I started to see that the Lumia 535 accomplishes for the low-end of the market what the Lumia 830 does for the mid-market: It brings higher-end features down to an audience that otherwise couldn't afford them.

The Lumia 535 has a full 1 GB of RAM, and not the 512 MB typically found at the low-end. It has the same 5 MP front-facing "selfie" camera found in the Lumia 730/735. And it has ambient light and proximity sensors, which aren't typically found on such low-end devices.

It does fall short of the Lumia 635 in a few ways, of course. The 535's quad-core Snapdragon 200 processor is about as low-end as they come these days (the 635 features a quad-core Snapdragon 400), and the Lumia 635 has Nokia's neat SensorCore technology, which lets the device function as a fitness tracker. The Lumia 635 has a ClearBlack display that is better in sunlight, too. But these differences make sense in positioning the 535 in the lineup. (What doesn't make sense is keeping the 530 in the lineup.)

Looking at the review unit that just arrived, I see a very nicely designed device that is much thinner than the 635 and thinner even than the 735. The screen is superior to that of the 530—what isn't?—but is a bit reflective and doesn't have wide viewing angles. (This isn't a huge issue on a smart phone, frankly.) I love the green plastic body, and orange would be a nice option too.

As with the Lumia 735 and 830, this is an international unit, but I'm not sure if this device will ever reach US shores. Regardless, it's a dual-SIM version and I believe 3G/HSPA only, so no LTE. This won't impact my opinion of the device, but I'm also not sure if the 535 will ever be sold in the US.

Full disclosure: Microsoft sent the review unit in a special, non-retail box with a pair of Coloud Boom for Nokia headphones and some digital materials. I generally prefer to get the full retail experience, but no real loss there.