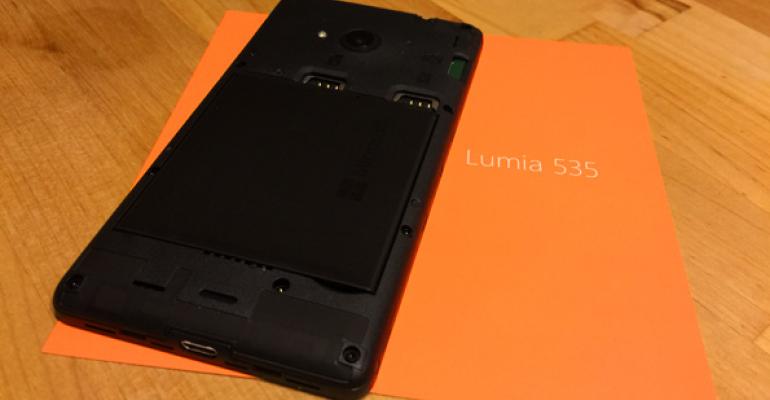 Microsoft Lumia 535: The Day After

Spending much of last night configuring the Microsoft Lumia 535 with all the accounts, data and apps I'd need to use it as a daily driver during testing, a few painful truths about this device became evident. I've always found a certain allure to "good enough" computing, and the Lumia 535 is vastly superior to the Lumia 530 that Microsoft should immediately discontinue. But while this low-end phone has a few features to recommend, it has several downsides that make it untenable for daily use.

A bit of background, which might explain how I test phones in particular:

I have three phone lines. The first of these is the phone number I've had since I switched to AT&T in 2007 to get the original iPhone, so it's my "real" phone number. It's the one I use every day. When the Lumia 735 and 830 arrived in October, I had immediately placed the SIM for this primary line in the 830, expecting that that device would become my daily driver. But it didn't take long to discover that the Lumia 735 was something special, and I've been using that phone, not the 830, as my primary phone ever since.

I originally planned to at least temporarily use my primary SIM in the Lumia 535, in part because I was immediately taken by this device's wonderfully slim form factor and 5-inch screen. (The Lumia 735 is thicker, but not in any way heavy, and the screen is a bit smaller.) But first things first: I needed to crack open the 535 to access the microSD slot so I could expand the device's paltry 8 GB of internal space and configure it to use the SD card for apps, data, music and photos.

That was my first indication that not all is well here. In what is a first for any Lumia device, the Lumia 535 is surprisingly flimsy, and I was actually worried that I'd crack the device in half trying to get the cover off. This was so alarming, in fact, that I took to the web to seek out the device's user manual so I could see how Microsoft described the removal process. After confirming that the best (only?) place to pop-off the cover is at the bottom of the device, near the USB port, I finally did get the cover off and added the SIM card. But I was nervous enough about this experience to hold off on the SIM. Let's just get the thing configured first, I figured.

Heightened to the apparent fragility of this device, I started noticing that it creaked a bit every time I picked it up, that the thin plastic case didn't form a perfect bond with the underlying chassis. On the Lumia 735, this isn't an issue because the case itself is thicker, and perhaps a bit because it also wraps around to the front of the device, instead of just the sides and back as on the 535. I know, this shouldn't surprise me, but the 535 just feels ... cheap. Not the good kind of cheap.

I have no issues with the screen or its resolution. Looking at this device side-by-side with the Lumia 735, I see that the Lumia 535's screen is bigger—good, and it's the sweet-spot 5-inches diagonally, also good—but not as contrasty. Oddly, the whites are whiter on the 535, which is also good, but colors are always richer on the 735. It's gloomy out today, so I can't test this yet, but my understanding is that the 735's ClearBlack screen will perform better outdoors. But the 535 has a unique Display option, "Sunlight readability," that you can enable to make up some of the difference.  I don't see a difference toggling the option indoors.

Washed out Lumia 535 on the left, vibrant Lumia 735 on the right

Tap-to-wake doesn't work out of the box. But it can be enabled, and I consider this feature to be quite necessary, so I'm glad it's there.

But as far as major issues go, the second one after the creaky build quality, is the camera. Much has been made, and rightfully so, about the 535's front-facing "selfie" camera, which I understand to be identical to the one in the 735. What I'm concerned with is the pedestrian rear-facing camera, which is a 5 megapixel unit that significantly underperforms the surprisingly-good rear camera in the 735. Photos are grainy and dull compared to those taken with the 735.

Lumia 535 shot on the left, and the same scene from the Lumia 735 on the right

And while this isn't exactly a deal breaker, Xbox Video won't play video truly full screen. There are always weird blank bands on either side. (You can expand the video to fill the vertical spaces only.)

It may be more interesting—and fairer—to compare the Lumia 535 to the 635, and I will do so. But my initial excitement about this device is somewhat tempered. Of course, it's a low-end phone. Of course it is. So I'll evaluate it accordingly. But I won't be using it full time. I would never personally rely on this camera, and I'm worried that it won't stand up to the rigors of regular use.

The Lumia 535 does have a nice new Microsoft boot logo, replacing the Nokia logo on previous Lumias.

Also, I noted in my Microsoft Lumia 535 First Impressions that Microsoft had for some reason provided me with a special nonretail package, which I sort of don't like. Fortunately, I've gotten a peek at the retail packaging too. It is identical to the international retail packaging for the Lumia 735 and 830, which shouldn't surprise anyone.

And it includes a normal pair of earbuds, not the crazy Coloud pair that Microsoft included with the Lumia 535 review unit. No surprise there either.