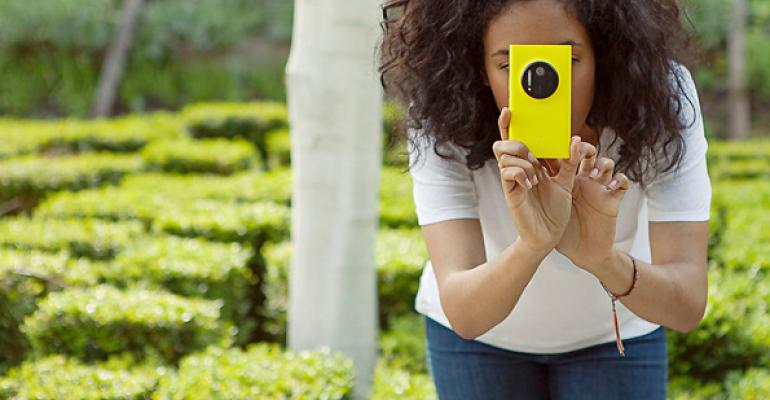 You need to make adjustments to use the Lumia 1020 effectively

Nokia accurately claims to have “reinvented zoom” with the stunning camera in the Lumia 1020. But this flipside of this reinvention is that you’ll need to change the way you take some photos. But it’s not a terrible adjustment, and the results are well worth it.

Actually, there are two sets of adjustments I’ve noticed, and I discussed some of these briefly in my Nokia Lumia 1020 Review.

The first is for current Windows Phone users. As noted in my review, the stock Camera app in Windows Phone 8 lets you use auto-focus to take a photo by pressing the hardware camera button, or you can tap on the screen to both focus and take the shot in one tap. With Nokia’s new Pro Camera app, however, you must tap the screen to manually focus and then tap an on-screen button to take the photo; that’s two taps, not one. (Auto-focus shots work the same way.) It may be worth noting that those coming from Android or iPhone will find this set up to be familiar.

Thanks to some comments in that review, I can also verify that Pro Camera doesn’t support “pocket to picture” if you have a PIN configured on your handset. (Which you should.) This means that if your handset is locked and you press and hold on the Camera button, you will need to enter your PIN before you can take a shot.

The second set of adjustments is a bit more general. Anyone who has used a dedicated point-and-click or SLR/DSLR camera knows that these devices support advanced zoom and macro photo capabilities which let you “zoom in” on objects that are far away or very small, respectively. This works with such devices because they support optical zoom, and the normal order of business is to zoom in and then take the shot.

Like other smart phone cameras, the PureView camera in the Lumia 1020 doesn’t have optical zoom capabilities. But it compensates for this by providing an amazing camera sensor that is both physically bigger than the units in other smart phones (up to five times bigger) and offers an astonishing 41 megapixels of data to work with. (Actually, there’s more to it than that. The 1020 camera also provides optical image stabilization and other Nokia imaging algorithms to deliver noise-free pictures. It has six camera lenses, the first of which is glass. And it has some pretty impressive software capabilities as well.)

What this means to you is that while you could zoom in on a subject as you do with any other camera (or smart phone camera), the results won’t be very satisfying. You will be at the mercy of the limits of digital zoom (as on other smart phones), which introduces noise, partially from hand movement that the optical image stabilization can’t correct for as well under such conditions. And from a macro perspective, where you wish to take a picture of something small—like the bumblebee example I posted in the review—you no longer need to get right up on top of something as you did before. In fact, Nokia recommends keeping the 1020 at least 15 cm away from any photo subject.

So in real world terms, you no longer need to zoom in or move super-close to a subject. Instead, you just take the photo and let the camera’s amazing hardware and software capabilities do the rest. And thanks to the super high resolution, you have a lot of pixels to work with. So you can take a picture of a city from a skyscraper, as Nokia did in New York City prior to the 1020 launch, and then zoom in on the resulting pictures and see great quality. Or you can take a photo of a small object like a bee, as I did, and then zoom in on the resulting picture, again, and see great quality. It works great. You just need to adjust the way you do things.

The Lumia 1020 also uses a unique dual-capture process every time you take a photo. One of the images saved to the device is a full-quality, full resolution original that is 34 megapixels for 16:9 shots and 38 megapixels if you opt for 4:3. The second is an oversampled 5 megapixel version of the photo that is used in other photo apps and experiences on the phone, and for sharing via Facebook, SkyDrive, Twitter, or whatever services you’ve configured. The processing and write times required by this dual-capture process means that you will experience about a 3 second pause between the time you take one photo and the time you can take the next.

I’ll be writing about low-light photography separately, but it’s worth at least mentioning this tip. As with the Lumia 920 before it, the 1020 offers amazing low-light performance and the pictures you get in such conditions are almost always astonishingly good, especially compared to those taken with other smart phones. But I’ve found that for best results, you should set the flash to “focus light only” (as you would on a 920). Again, more on this soon.

And don’t forget the other Nokia camera apps. As with low-light photography, I’ll have a lot more to say about these incredible apps in the days ahead. But let’s just say that results like these are only a click away. I mean, seriously.