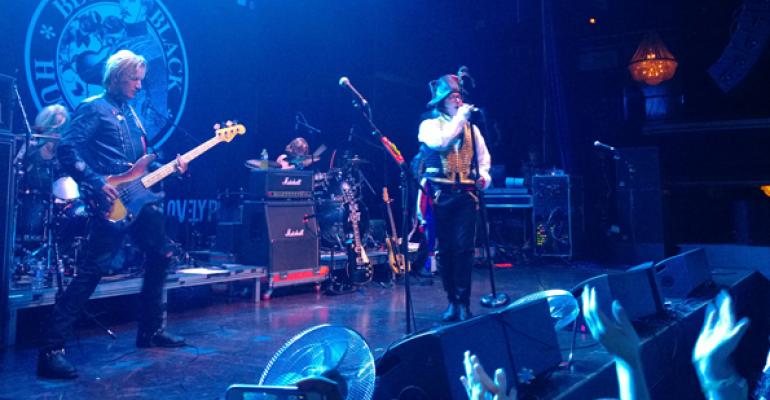 I had a chance to test the Lumia 1020 in the harshest of conditions last night: A dark concert with flashing lights, moving subjects and blaring sound. But if you’ve been reading along, it won’t come as any surprise that Nokia’s flagship phone performed admirably.

If you’ve been to a concert lately, you’ve seen the sea of smart phone screens as people eagerly record the event. Most of the resulting pictures and videos are pretty lousy, however. And that’s because the low-quality cameras in today’s smart phones just aren’t up to the task. They’re low-resolution, typically, and don’t work well in low-light situations.

Starting with the Lumia 920, of course, Nokia solved the low light issue. But with the Lumia 1020, Nokia has infused the first truly good camera into a smart phone. So I was curious to see how it performed in this situation, where I could get very close to the stage and fire away.

Which I did: We saw Adam Ant last night at the Wilbur in Boston.

Before the show, we had dinner with friends. So in walking over to the theater I paused to take a few shots of a local Boston landmark at night. Just to confirm that this camera’s low-light capabilities were top-notch. Which of course they are.

As for the concert itself, I took a ton of pictures and a few videos. The photos were hit and miss as you might expect of an event in which the people you’re trying to photograph are moving around a lot. So there are some movement blurs here and there and some truly unusable pictures. But there were some great shots as well.

The other was “Stand and Deliver,” the full song. I moved my hands around while recording, so I think I blocked the microphone(s) a bit here and there. Still, not too shabby.

These were the best shots I’d ever taken during a concert with a smart phone, by far. And while a real DSLR would have likely resulted in clearer pictures, I’m not sure they would have allowed such a device in the venue. But everyone carries a phone with them at all time. And this is the one to have if picture quality is a concern.

Note: I’m not super-interested in your opinion about my taste in music. If you have comments about the actual photos, please fire away.