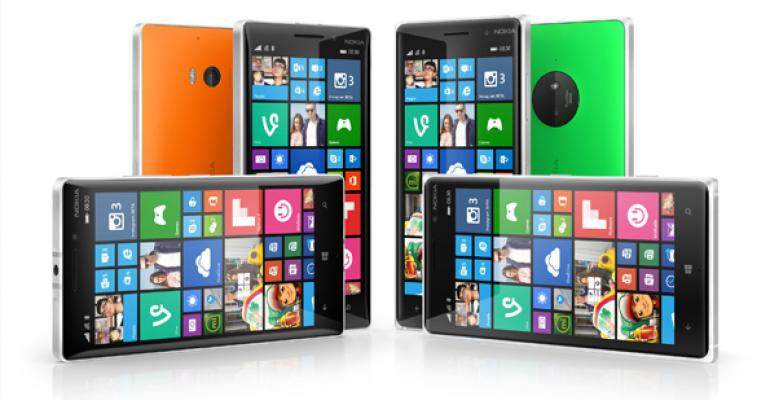 I was briefed about all of these developments last week, and was able to get my hands on each of the handsets and accessories. But Microsoft wouldn't allow me to photograph anything, unfortunately, so I'm relying on their photos here.

There's a bunch of stuff, so let's dive right in

Billed as an "affordable flagship," the Lumia 830 provides the look and feel of the high-end Lumia Icon/930 handsets but in a slimmer, lighter and less expensive package. Think Icon on a diet, and you'll have it about right: The 830 looks almost identical but is much thinner.

But Microsoft has also made the rear cover of the 830 easily removable, so you'll be able to purchase different color covers—something that was impossible without major surgery on the Icon/930—in Nokia's 2014 colors: orange, green, black and white. This is a huge improvement over the high-end phones on which it is based.

Aside from getting the form factor right this time, the big news here is the optics. Like the Lumia 1020, the 830 sports a large and obvious rear PureView camera module. But it's not as physically big as that on the 1020, nor is it as impressive: It offers a 10 megapixel sensor, vs. 41 on the 1020 (and 20 on the Lumia 1502 and Icon/930). But it still offers ZEISS optics, of course, and optical image stabilization, a first in a device this thin.

Looking beyond the camera, the 830 provides decent specs with a 1.2 GHz quad-core processor, 1 GB of RAM, 16 GB of internal storage with microSD expansion, integrated wireless charging and the new Lumia Denim firmware, which I'll describe separately below.

The Lumia 830 begins shipping this month "globally," which is a code word for "not in the United States." Sadly that's true of all the phones Microsoft is announcing today: They're all international only. The 830 will cost about 330 euros (about $440) before taxes and subsidies, Microsoft says. So it will be relatively affordable for those who want to buy one off contract.

For more information about this handset, please read my Nokia Lumia 830 Preview.

The LTE-based Lumia 735 and its dual-SIM alternative, the 730, is Nokia's infamous "selfie phone," thanks to its unique front-facing, wide-angle (24mm) 5 megapixel camera. This device is the logical successor to the Lumia 720, which I own (though it was never sold in the US) and consider to be among Nokia's best handhelds from a form factor perspective.

Like this predecessor, the Lumia 730/735 is thin, light and beautiful, shockingly light in fact. But it's even better than the 720 design because it has a removable back cover, and as with the 830, you can get replacements in gloss orange, matte green, white or black. What's really weird about the 730/735 is that it looks nearly identical to the dense and heavy Lumia 920. But the back panel pops off and it's so light it seems like an empty engineering sample. You have to hold one to understand what I mean.

So let's discuss that selfie camera for a moment.

According to Microsoft, the 730/735 is ideal for Skype video calls, and I was shown a demo in which a video from the devices was compared to similar shots with an iPhone and Galaxy S5; the Lumia displayed a much wider shot, making it possible for others to get in on the action. Microsoft is also providing 730/735 users with a free, three-month Skype Unlimited World subscription, and with Windows Phone 8.1 Update 1 (with Denim, see below), there is one-tap access to Skype video calling from within the standard phone app.

For more information about these handsets, please read my Nokia Lumia 730/735 Preview.

I was expecting to find out about the Lumia 830 and 730/735, but the appearance of a new Lumia firmware release—called Denim—was a surprise. You may recall that Microsoft/Nokia released the Cyan firmware release coincidentally with Windows Phone 8.1. Denim is the firmware release that will ship alongside Windows Phone 8.1 Update 1, both on new handsets—the 730, 735, and 830 all include Update 1 and Denim—and, later, to existing Lumia handsets too.

In tandem with the completion of Lumia Denim, Microsoft is also rebranding its Nokia apps for Windows Phone so that they will become branded as Lumia apps. Nokia Camera, for example, will be renamed Lumia Camera. This is happening for all of the apps that currently carry the Nokia brand.

Like previous Lumia firmware updates, Denim is a big deal, and this release—like Cyan—offers important updates related to the camera in Lumia handsets. These include:

Performance improvements. Lumia Camera will start up and capture photos much more quickly than before. For example, on a Lumia 1020, you can count to three or four between shots; Microsoft hopes to get that to under a second with Lumia Denim. The key to this speed is background processing, and while I wasn't able to test this on my own devices, I was shown how this improves the camera speed on previous devices and am hopeful.

Motion Capture. Using a new Lumia Camera feature called Moment Capture, you can long-press on the Camera button to record 4K-quality video at 24 fps for a few seconds. Since each frame of the resulting video is in fact an 8.3 megapixel still shot, you can then dissect this short video to find the best still shots and save them separately.

Rich Capture. Another new camera feature called Rich Capture works a bit like the camera app on the HTC One M8 for Windows: It lets you take shots and then later adjust the settings of the resulting shots. Basically, Rich Capture applies HDR effects and dynamic flash when needed, and lets you get on with enjoying the moment and not worrying about camera settings.

Image quality improvements. As part of an ongoing effort to improve the picture-taking quality on existing Lumia handsets, Denim will include an improved algorithm for capturing high-quality images even in very low light.

Lumia Denim (and the Lumia Camera app) will ship with the new phones of course. But then it will head out to the Lumia 930, Icon, and 1520 via over-the-air updates. (The Lumia Camera app will head out to the 830 at this time as well.) Then, Denim will be rolled out to all existing Windows Phone 8.x handsets, following the usual baloney carrier testing waiting period. Think very late 2014 and early 2015.

I'm a big fan of Nokia's wireless charging accessories, but if they have an issue it's that the phone has to be correctly aligned on the charger for it to work correctly. So the new DT-903 solves this problem: It's much bigger (but very thin), making it difficult to misalign your phone on top.

And it has some new features including a cool "undercarriage" lighting system that can notify you with light when your phone's battery is low, among other things. It also has a night mode so it won't keep you awake while you're trying to sleep. No word on the pricing.

Microsoft is also showing off a new Microsoft-branded (as opposed to Nokia-branded) Miracast dongle, which lets you wirelessly display to an HDTV from a Windows-based tablet or smart phone. It works like other Miracast dongles, but with a twist: It includes a thin NFC sliver for easy pairing with compatible devices (or you can use the native UI in Windows or Windows Phone of course), and it's removable, so you can leave the device behind your TV but keep the pairing plate out where you can reach it with your phone.

That's an excellent idea. But as with the wireless charging plate, no word on pricing, sorry.

I know what you're thinking. What about the United States?! What about a new flagship device, especially on AT&T or whatever carrier you prefer? I asked these questions, of course. But there's nothing to say yet: These three phones, the two accessories, and Denim are what Microsoft is announcing this month. Sorry.

I will say this, however. More flagship devices are coming, obviously. But with Microsoft/Nokia having seemingly figured out how to succeed in the low-end of the market, it does kinda-sorta make sense for them to take the next logical step up the chain and focus on the mid-market now, doesn't it?

I too am eager to see a true successor to the 1020, a new 1520-style phablet, and whatever other high-end goodness that they're planning. It will happen. It's just not happening now.