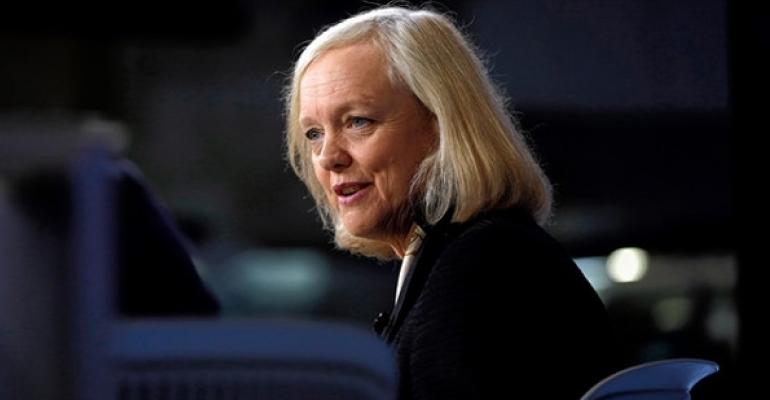 HPE to Spin Software in $8.8 Billion Deal With Micro Focus

As part of the deal, Hewlett Packard Enterprise said it will receive $2.5 billion in cash and its shareholders will have 50.1 percent ownership in the new merged company. The software assets include areas such as application delivery management, big data and enterprise security, the Palo Alto, California-based company said Wednesday in a statement.

Whitman -- who split HPE from sister company HP Inc. in November -- is looking for more ways to pare down her company. Her aim is to make Hewlett Packard Enterprise nimbler to woo customers with more options from cloud-computing providers such as Amazon.com Inc. and Microsoft Corp. The move follows the announcement in May that Hewlett Packard Enterprise would merge its technology-services division with Computer Sciences Corp. in a deal valued at about $8.5 billion.

“They are fantastic assets,” Whitman said in an interview. “They’re just not core to our strategy.”

Hewlett Packard Enterprise had been considering a sale of some of its software assets at least since July, according to people familiar with the matter.

Shares declined as much as 4.7 percent in extended trading after earlier gaining 1.1 percent to close at $22.09 in New York. The stock has jumped 45 percent this year.

Hewlett Packard Enterprise also Wednesday forecast profit, excluding some items, in the current quarter of 58 cents to 63 cents a share compared with analysts’ projections of 60 cents. The company reported third-quarter profit of 49 cents a share while analysts’ had estimated 44 cents, according to data compiled by Bloomberg.

Micro Focus, based in Newbury, England, can use the assets to bolster its software products that help customers on a variety of fronts, including business applications, security and with data centers. The combined company will be led by Kevin Loosemore, executive chairman of Micro Focus. Micro Focus expects to improve the margin on Hewlett Packard Enterprise’s software assets by about 20 percentage points by the end of the third full financial year following the close of the transaction, the companies said.

“It’s a really successful pure-play software company that knows how to manage mature assets and growing assets,” Whitman said. “And actually, these assets will get more investment with Micro Focus than they would with us.

HPE will spin off enterprise-services division to Computer Sciences Corp
May 25, 2016