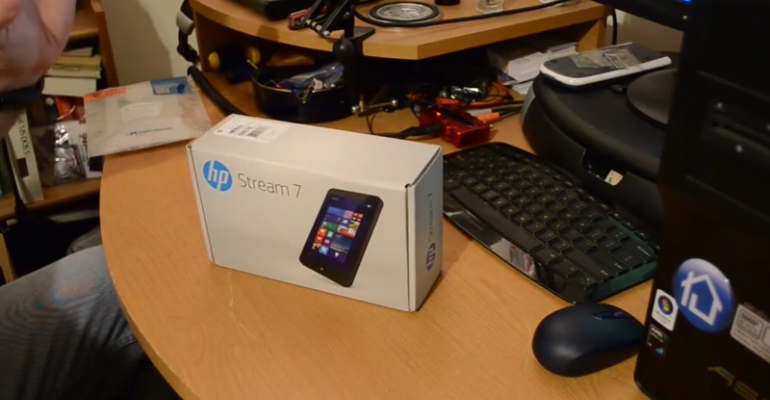 After a small hiccup with the initial delivery of the first HP Stream 7 I ordered from the Microsoft Store last week my replacement shipment arrived on my doorstep late yesterday.

As you will hear in the video this was a great deal at $79, which is $20 off its normal $99 price, and it comes with a few extras that make it an even better tech grab.

So not only do you get the HP Stream 7 itself but you also receive:

- Office Personal for one year (a $69.99 value) which includes 1TB of OneDrive storage and 60 minutes of Skype usage per month during the subscription.
- A $25 Windows Store gift card to spend on apps, movies, music and games on Windows, Windows Phone and Xbox.

So just those two options alone are of higher value then the cost of the HP Stream 7 itself.  In fact, it comes out to almost a zero balance sum when you add in the shipping cost.

The device also comes with some OK specs that, for a tablet of this size, will make it a great consumption/companion device. This is also one of Microsoft's Signature Editions which means no junk installed - just Windows.

Here are the specs:

After getting the tablet updated through Windows Update (51 updates) I created a USB based Recovery Drive so I would have the original Windows 8.1 Bing setup and then I dove head first into putting the Windows 10 Technical Preview Build 9926 on it. That install was successful and I will provide the details on how I did it in a future post.

For now here is the unboxing video: